The return of the rainy season and other meanderings 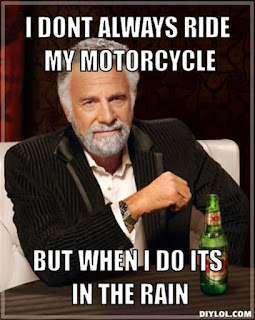 Their is a 70% chance of rain today.  A slightly less chance of rain tomorrow but the chances of me getting wet are almost guaranteed.  I've an unwritten rule when it comes to riding.  Anything above 45% is a crap shoot and I'll take the car everywhere.  It looks like I'll be driving to work most of the week.

I don't mind riding in the rain, in fact I rather enjoy it as long as I feel "relatively safe."  Riding in wet weather requires a special type of skill, and I'm glad that my motorcycle riders training class was held during a rainy miserable cold weekend.  I learned not to be afraid of the rain.  However if I can avoid it I will.

Florida however has two seasons basically.  The "dry" season which most people refer to as "fall and winter" and the "wet" season, which generally is the spring and summer.   Our hurricane season generally runs from June 1 to November 30th and it's that weather pattern that delivers the rain.

Well my adopted home of Zephyrhills is inland enough to avoid storm surges and other flooding, I'm still not looking forward to living through my first hurricane, the last hurricane to touchdown in Florida was Wilma back in 2005.  Although there have been a variety of tropical storms that have caused damage in Florida.   The difference between the two is basically organization and wind speed.

It's only a matter of time the experts say.


Does no one wave anymore?

Let me paint you a picture.   It's a sunny day, the lone scooterist is heading down the road enjoying how a horse wants to race him to the far fence post.  Their are only a few fluff ball clouds in the air and all is right with the world.   Across the way comes a few bikers, a small group of 5 or so fellow travelers.

I throw out my hand giving them the peace sign above the road, wishing them safe travels down the road.  It's ignored.

Ok...whatever.   I'm okay with that, who knows what is going through the mind of another rider?  Or what they have to deal with.   Ah, a sports bike!  I throw out my hand again and say "Peace to thee my bother of the two wheels."

hmmm.....that is not the peace sign he is giving me back, but at least its a wave. 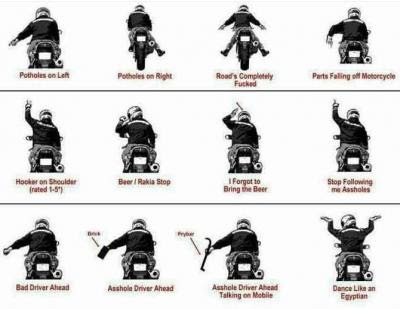 All jokes aside though I'm not sure when or how the wave fell out of favor.  I generally try to wave at every rider I see, as long as it is safe to do so.  For what ever reason I've only been getting the wave back about 50% of the time.

I get it to a great extent.  I'm on a scooter and not a "real bike" even though Kimmie is more than capable of either keeping up with, or blowing away most cycles on the road.  I also understand that now that the weather is fair we are getting more garage queens out on the road.  Bikes that never see the light of day unless they travel from pub to pub on the weekend.  Maybe I'm not worthy of the wave in their opinion?

I can also understand a new rider might be a little reluctant to take their hands off the handlebars even for a moment, and the wave is not exactly covered in class work when you get your license.

Still though...how hard is it to throw out your arm in greeting?    We should be more friendly to each other.


To the Northern Hinterlands!

Sue and I are talking about taking the car north this weekend.  Up into the counties on the Nature coast that we are not familiar with.   Taking a picnic basket, our swim trucks and spending a night in a hotel somewhere.  Well I've no issue pointing our wheels in that direction, I would rather go with some sort of destination in mind...but the best finds are always the unexpected pleasures one finds on the side roads.

The problem that I'm having is that there does not seem to be much in the way of anything between Brooksville and Tallahassee.

I suppose we may find a little out of the way restaurant, or some town holding a local festival.  More on that later, but it's a good change of pace.  Considering all her medical issues and so forth, I'll take what ever good days I can.

I wonder how many wineries there are bestrewn here and there?  My wine fridge is getting a little empty.

Posted by The City Mouse in the Country at 9:51 AM

Have a great weekend away!

Not sure about the waving thing. Around here it is mostly the Harleys that won't wave, unless they are by themselves. They are more likely to wave if their friends aren't looking.

Some new riders don't feel comfortable taking their hands off the bars too.

I wave at everything on two wheels even bicycles.

I think the waving ratio is about right. It could be for many reasons: They don’t want to - by choice, or fear of a lose of control. They don’t care - because it’s not in their nature, or don’t feel you warrant their respect. They don’t know what the Two-Finger salute is - It’s possible, even for ong time, but loner, or weekend riders. They didn’t see you - I tend to believe this is the most common reason. The act of looking far down the road, looking into your turns, and being aware of everything around you is a skill I’ve seen a lot of riders not practice, or use.

I try to ride ‘down the road’ by looking as far as possible, instead of looking 'at the road', a practice many riders may practice while riding. If you are looking at the road, or only aware of the vehicle in front of you, you may miss what’s coming down the opposite lane.

Sometimes you do need to be aware of what’s going on in front of you. A car brakes, switches lanes, pulls in front of you, or more. In this situation you could completely miss a bike passing by. That’s understandable.

But when it’s just you on the road, and you see a fellow rider coming the opposite way, you clearly give a friendly salute, only to be ignored, you can only shake your head, but not for long.

You were the better rider.

I live in Tallahassee and have made the run between Crystal River and Tallahassee. Food is pretty much limited to fast food and local places. The scenery is nice though and the roads are good.

Nice post. I learn something new and challenging on site I stumbleupon everyday. It’s always exciting to read articles from other authors and practice something from other websites. Motocross Helmets