UPDATES - Pittsburgh and the Trucking school

As many of you know, I'm from Pittsburgh.   I did not know any of the people that were involved in the senseless murders.   I don't know anyone that was directly involved.

However it's always different when it's your home.   I know that are of Pittsburgh well, having eaten in the restaurants nearby, having friends that grew up in the area.   I remember dancing in a few local bars.

Squirrel Hill, and to a lesser extent; neighboring Shadyside, where always the Jewish part of town.   Hasidic Jews are very common on the streets, and recently I learned that Pittsburgh has one of the larger Jewish communities in the United States.  It's growing as well. 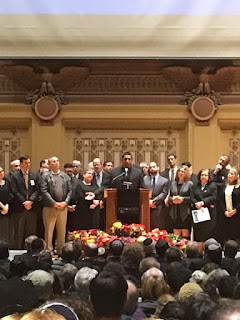 By now, many people have learned about how the local Muslim Community raised over one hundred thousand dollars for the families of the slain and injured.

Pittsburgh is a special place, everyone raves about their hometowns of course, but we "Yinzers" know something about our town.   Part of it was due to the history of our city, part of it was do to topography.

Pittsburgh is a city of immigrants,and the Jews started to move into the area in the early 1830's.  As was the custom at the time many of them congregated together in certain areas of the city,  Squirrel Hill became the Jewish neighborhood, and it's remained that way since.

Pittsburgh however is not a easy city to get around in, and you often crossed rivers and bridges (literally and figurative) to go from one part of the city to another.   This exposed Pittsburgher's to different cultures, languages and even religious beliefs on a daily basis.

Since Pittsburgh was a "blue collar steel town", "The Polack, the Jew, the Negro, the Irishman" all worked side by side and provided the steel that forged a nation.  Various words unique to the area but I'm sure a linguist would be able to trace the roots of them back to various languages somehow formed so that everyone could somehow communicate.

What this has meant is that Pittsburgh and it's citizens have been very proud of their city, very open to outsiders and have developed an attitude of "live and let live" when it comes to your personal beliefs and opinions.

Generally speaking, Pittsburgh is a very progressive and forward looking city.  It is stronger than hate.

Now that we got the political part of the blog out of the way......

Let's talk about not succeeding.


I could never really master backing up the truck.   Straight line backing is exactly like it seems and I did OK with that.  Where my issues where is something called "Off Set Backing" and "Ally Backing."

Off Set Backing is basically go from Lane A into parallel Lane B.  You pull up forward and then back the truck up into the parallel lane.

While the attached video makes it look easy, it's actually not.   Set up is everything, although the ally docking is a bit easier than the off set.

Sadly I just could not seem to master it.  I had spent over 200 hours of working in class, on the pad (where we practiced these procedures) and actually driving on the road.


I tried my best, I gave it my best shot.   Even though I mastered everything else, these two procedures I just could not figure out.

Long story short, I threw away a lot of money doing something I'm not sure of I would have liked doing in the first place.  I also find myself without a job at the moment.   I'm not even sure if I can collect unemployment since my former job and I parted ways on good terms, although I was told that I would be welcomed back by former managers.

It's okay no matter what happens.  Life is weird and wonderful and full of surprises.   In the meantime however...anyone got a job open?
Posted by The City Mouse in the Country at 8:02 PM