I finally went on my group ride.  I've gone on rides with two other riders that are friends of mine, been involved with groups of riders that I don't know - forming a informal and unofficial group for mutual protection while zipping down the highway.  These things don't count for me.

I've been wanting to go on a group ride, an organized ride out to somewhere I've never been, for sometime.  Finally I got the chance.

I'm not sure how many scooters eventually made the run to Sleepy Hollow.  Kimmie was the only Kymco scooter.  The group consisted of mostly Honda Silver Wings, Burgmans and two Aprilla's.  One or two off name brand scooters, surprisingly enough, no Vespa's were to be seen.  A Harley and and Gold Wing rounded out the group.

I fell into the middle of the group and we quickly left the main part of the route (please see the map) to take some side roads.  There were some thrills as the group traveled along at about 50 miles an hour through various sweeping turns.  Over hills and through Florida's central back country.  It was pretty cool to top a hill and see all the other bikes in front of me.  During this part of the ride I was worried about two things.  I wanted to keep up with the group and wanted to make sure that I made the turns well.  Some turns I felt fine in, one I wish I could have back as I entered it to quickly and cursed to myself as I ended up wide cutting off the cyclist behind me.

On and on we went.  A few beautiful places called to me to take photographs.  An old dilapidated barn that called out to be explored.  A lake with a lone single tree sitting out in the water, the light playing over the water.  A strand of cypress trees off in the distance.   If I had been alone or a smaller group, I would have stopped, but the phalanx kept moving on down the road, and so did I.

There was an incident before we got to Sleepy Hollow which bears mentioning.  One of our group went down.  I was immediately behind him and he froze in a turn, becoming fixated on something right in front of him.  The back tire went squirrelly and down he went.  It seemed to happen in slow motion, I veered to the left to go around him and then pulled off, only to find myself in soft soil and unable to get off the bike because it would fall.  Luckily the other riders were able to see to him quickly.   He was shook up but not hurt badly (due to privacy concerns I will not go into more detail concerning the accident).

After that the ride had a different feeling,  a slower pace was called for as we negotiated the last 10 - 15 miles or so.  Each of us understanding that the slower pace was for him, and it could have been us that went down.

Once we arrived there you paid $6 and stood in line for food.  Basically from the conversations I had with other riders, it's pretty much what ever they have in the kitchen.  So it's not uncommon to switch from steak to fish or chicken without any warning.  It was actually better than it looked. 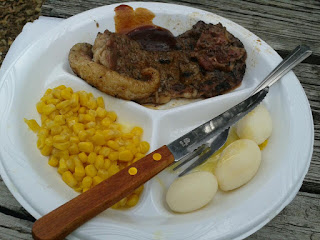 Sleepy Hollow is an outdoor restaurant that sits right on a river.  They had a decent cover band playing and lots of shade.  Sitting next to a river a few boats pulled up, air boat rides were available.  Here are some additional pictures.


I ended up breaking from the group on the way home.  They were going to head back the same way they came and I wanted to ride the route suggested by the motorcycleroads.com site.  I was disappointed that I did that.  The way home was more or less straight.  Little changed in the way of the view.  If I would have stayed on this road I would have returned to the starting point.  I didn't do that.  Deciding to cut cross country and head home via a different route I got a little lost, which is never a bad thing...although for some odd reason my GPS on my phone would not work.

OK...Keep heading inland and eventually you'll find a road you know.   I did it was I-75.  So I jump on I-75 for a few miles and look for the first exit sign...as it happened it was for Dade City.   Literally 12 miles from where I live.

Would I ride with this group again?  Yes.  Although I think I would do better with a smaller group.  Our group leader was amazing, keeping everyone together and driving at a pace that suited most of the riders.  He was very attentive when the rider went down.  I like the idea of being able to pull off the road if something unusual catches my eye.  I like the idea of traveling at a pace suited for me.

Overall it was a great day, the sun was shining.  It wasn't to hot.  I got to to do some much needed recreational riding and got some much needed practice on twisties.  That's all that matters right.  The ride was 146 miles total.

UPDATE:  I had to go to work this morning, only to discover a flat rear tire.  Guess I picked up a nail or something.  :(  I guess Kimmie didn't like being ridden that hard.
Posted by The City Mouse in the Country at 7:29 AM

I am glad you enjoyed your first group ride. Unfortunately with more riders there is more of a likelihood for incidents to occur.

I forgot about the not stopping where you want part. It is nice to be able to stop for photo opportunities when something catches your attention.

I know riding home from Eastern Oregon last year when Bobskoot was with us he would have liked to stop more often for pictures, but we had 470 miles to cover so we didn't stop hardly at all.

This outdoor bistro is something! I wonder how the food tates. I bet its delicious since there are so many people in that place. Hmmn, looks great too! Thanks!

I've enjoyed the group rides I've been on, but not enough to look forward to the next one. I would like to find a riding partner. I think that would be ideal. Someone with me in case something happened, but still enough empathy and space to discover "our" ride.

The group thing just makes me anxious, which for me is not a good thing.

I'm very glad you enjoyed it and wish to do it again. There is a group of folks here in St. Louis who ride together all the time and have a great time.

Glad you discovered the flat tire when you came out and not on the road.

I think riding with 2 or 5 friends would be perfect. This was a good experience for me and I hope to do it again...as far as the tire goes Keith, T-CLOCK my friend.

I've done a couple of large group rides and it not my favorite thing to do. I hate the pressure feeling & not being able to stop & snap pics. I get together with a group of girlfriends & there are usually 5 to 10 and we go on weekly rides. We are all pretty much from the same riding school so we seem more in sync. I am usually one of the ride coordinators and we have a chat about ride rules so we are all on the same page. That being said stuff happens sometimes and you just have to be prepared as much as you can be. Just ride your own ride.

That was fun considering you've never been to a group ride.
Aaghhh, the inconveniences of unexpected flat tires!