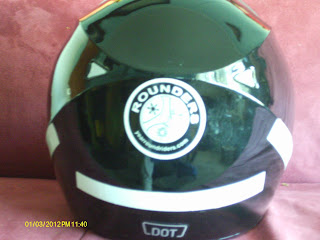 Living in Florida, it's easy to be a Rounder.   According to their website a Rounder is:

The Rounders are men and women who enjoy their motorcycles so much they ride them year round. The group was founded by a bunch of Mid-Westerners (inspired by a Kook on the East Coast) who ride them even when the temps are below freezing or above hot. The object of becoming a Rounder is to have fun, promote safe, responsible motorcycle use on a regular basis for as much of the year as you can. In the spirit of fun we have concocted the following levels of Rounderhood following the Fahrenheit temp scale:
100's+ Red Hot Rounder
90's Sweating Rounder
80's Half Baked Rounder
70's - R&R (Rounder Relaxing)
60's -Jr. Rounder (Just Riding)
50's - LOTF Rounder (Looking Over The Fence)
40's - FOTF Rounder (Fringe of the Fringe)
30's - Half Rounder
20's - TQ Rounder (Three Quarts)
0-20 - Rounder
Sub Zero - KHOF Rounder (Kook Hall of Fame)

Members can proclaim themselves to be in the various categories based on the truthful telling of their riding conditions. If you lie, then a pox be upon you and may your valves need constant adjustment.

To be a True Rounder, you have to ride every month of the year.

If you have a motorcycle and like to ride it, then you can be a Rounder.

These idiots ride in the snow.

I want to be one of them.

It's only in the last few days that I have truly felt like belong to such a honored group.   Over the past few days here in West Central Florida we have had rain and wind gusts up to 30 miles to hour.  At night, when I ride home from work at 1 AM, the temperature's  dipped to freezing or below.

I feel like one of them because I was one of a handful of bikes on the road.  Even during the day when the temperature was in the mid 50's...I counted maybe a dozen bikers.  Here I am on my little scooter doing what "real motorcyclists" are afraid to do.  I am out nearly every day riding, in all types of conditions. 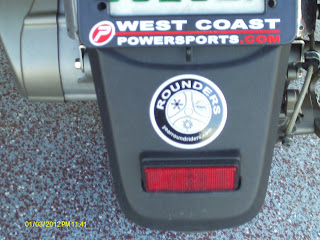 I'm proud of that.  I am also amazed and impressed by the insanity of taking a bike out in "less than ideal" conditions.  Of course, if I still lived in Pittsburgh, would I feel that way?   I have to say that yes, I would. I don't get to do much recreational riding. But when asked what I like about riding...I said the following "I think it's something primitive. Just you, the machine...no distractions. Your fully committed to keeping yourself and the bike safe...because the road below you is unforgiving. It's being on that edge...not being stupid, not being foolish...but connecting to the world around you. Smelling the flowers as you pass, feeling a stone as it kicks up and strikes you. Your fully alive.  Your fully engaged."

Now that being said.  I'm not stupid.  I'm not going to ride if I don't feel I can't handle the circumstances.  There have been times when I just didn't want to ride in because it didn't "feel right."  So I guess I'm hooked.  I guess I'm a "Rounder."

To read more about the Rounders see this article from Rider Magazine.

Posted by The City Mouse in the Country at 10:33 AM

Cool. Sadly year round riding here is not an option, although I have ridden in every month of the year except February. When I was in the city it was easier because the roads were kept clear of ice and snow, but out here in the country 2 wheels just won't do it on icy roads from December thru March.

Good on you for keeping to ride in all kinds of weather. Although I am sure you get some strange looks from people that can't believe you are out in two wheels during the bad stuff or when it is cold.

We too prefer to ride year round and most of the time we can here in Oregon. I've ridden in temps over 100˚F, not fun, but the lowest I've been out on the bike is 26˚F and that was to darn cold.

And, those stickers are reflective!

The heat in someways is more of a challenge than the cold.

Ice and snow? I want more than two wheels, although I know people who ride even then.

I love the concept of the "The Marshmallow Butt 235" and now that I have the Kymco plan to do more of these.
~Keith

I like the idea too and already have a post planned about my adventures on the Marshmallow Butt 235. It may occur as early as this weekend as well. :) We will see.

Canajun, I don't know if I would ride in ice and snow but I'm pretty sure I would take the bike out on cold and clear days. I was thinking about this post the other day and thought I might have insulted some people that I know love to ride but are unable to do to weather. Which was never my intent. Somehow, somewhere I fell in love with biking and can't imagine not riding any more.