Exploring Brooksville - a pretty place with a racist history

It's your typical Summer weather pattern here in Florida, the rain was moving in off the Gulf coast and again I had to decide if riding was worth it.  The TV news blabbing about a 60 to 70% chance of rain.  Weather.com broke that chance down even further for me.  I could stay dry if I moved my ass and had a little luck.  If I was going to do this today, it would not be on Kimmie sadly.

My destination was Brooksville, Fl which lies about an hour north of me in Hernando county.  The roads in the area are twisty, the county is mostly rural which makes it one of the more popular destinations for riders in the area.  It has an annual Blueberry Festival in April that celebrates the area's agricultural roots.  I also learned that is also the geographical center of Florida although I could not find the exact spot anywhere on the map.

It's a pretty city with roots dating back nearly 150 years.  It also has a violent racist history which sickened and interested me at the same time.  Brooksville was named in 1856 after Preston Brooks, a South Carolina Congressman whose claim to fame in the history books is that he beat a anti - slavery congressman with a cane on the Senate floor.  An act that may have indirectly lead to the Civil War.
It also has a history of lynchings, of intolerance and trials.

So here I am, riding a hour or so north to visit the courthouse.  To learn about how a deadly feud could erupt over interracial marriage (at a time when such things were simply not done), how the courthouse could "mysteriously" catch fire and destroy the evidence of the lynching that followed the death of a black Minister and former county commissioner.   How, for a brief time this county was lawless and filled with vigilantes called "regulators."

How a county of only 4,000 people at that time would have over 40 murders, many of which are still considered unsolved.  Many of the murders were related to race, but also included the death of a sheriff and two judges.  One of the area's sheriff's, W. D. Cobb, was even accused of killing two white men, one of whom was involved in a crime that Cobb supposedly took part in.  How and why this happened interested me although I still don't have an answer.

Two hotels were burned down during this period and house fires were common.  Even after justice was restored, Hernando county had the highest incidence of lynchings between 1900 and 1930, possibly second only to the entire state of Mississippi.  However those numbers are hard to come across, and frankly I'm not sure I want to.

Brooksville still has racial tensions, brought to the surface recently by the Confederate flag controversy but also by the vandalization of a historic black cemetery, which according to local legend and myth; you can still see the body of a lynched man at night.  Or sometimes hear the screams of a baby.  Entering town there was a business proudly displaying Confederate items.  History they say, repeats itself.

How this town could have so many Confederate moments yet not one that even mentioned Brooksville African American community?  If they did, then I was unaware of it.  History moves on and in this pretty town it's hard to believe such things happened in the time of our great grandparents.  We have come so far in such a brief time, but at the same time we have so much further to go.  So here I am, looking for historic sites and information on this dark period of history. Then I'm reminded that I'm living in a dark time, as a Confederate flag burning was recently attempted in Brooksville.  It did not turn ugly but had the potential to, the pro flag side outnumbered the anti flag side and cooler heads prevailed.

Living in Florida it is easy to forgot that despite all the sunlight and natural beauty, that darkness still lurks.  That ugly things still hide in the shadows. 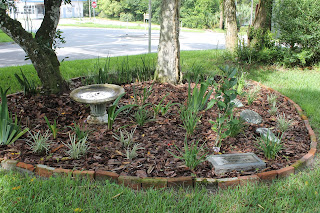 In a way I wish the weather would have held off for me a little while longer.   The groundskeeper at the May - Stringer house was telling me about his ghost sightings.  I was hoping to visit the rail station and one room school.  The African - American cemetery was on my list.  It was to wet, to nasty...I was lucky to get the time I did to look about.  Frankly though...I'm not sure I go back.  You can't go in reverse, only forward.
Posted by The City Mouse in the Country at 7:27 AM

You should be able to comment here. I'm having nothing but issues with Google + and have now disabled the account. Sorry for the inconvenience.

IThanks for switching the comments back, much easier. I read somewhere Google+ was no longer, but I don't know if that is true.

Such a sad history for that town. Mind you there are a lot of towns (countries) with a sad history. I agree that we have a long way to go for everyone to just live together in peace. I don't think we'll see it in our lifetime, but it sure would be nice. It is hard for me to comprehend how horrible the African American people were treated such a short time ago. I couldn't imagine living in those times.

It's interesting that you made this trip. I've been considering a trip to a place south of me, to Fort Mott State Park in South New Jersey, and Fort Delaware, set on an Island in the Delaware River that was used as a prison for Confederate soldiers and several generals.

What do I hope to find? Not sure, but the historical lure is there. I'll look to see if any of the Prisoners are from Brooksville.