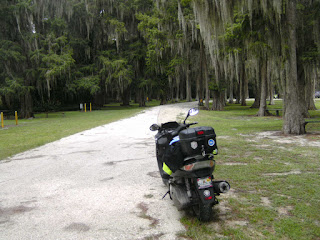 Their were seven of us on Saturday, various models of bikes - my Kimmy, a Honda CTX, a lovely 1978 Vespa P200 that was slowly but lovingly being restored and the other bikes.  We are somewhere on route 17 in South Central Florida heading towards a town called Frostproof.  The promise of "the best Onion Rings in Florida" and Ice Cream ahead of us.  I was looking forward to the ice cream.  We were cresting a hill.

"Oh Wow" I stated in my helmet.

Laid out before us was acres of Orange fields and a large beautiful lake.  The water glowed in the afternoon sun.  It's those moments that I love on a bike.  That was the only "Oh Wow" moment on the ride...but there were some interesting views.  We rode past old gnarled bushes that reminded me of something out a bad post-apocalypse movie.  An old water tower that was nearly eaten all the way through by rust, standing as a lonely sentential on the side of the road.

Generally all I use the bike for is commuting.  I don't get out very often to do a group ride, sure I have some adventures and I've done more than a few day trips on my own.  When I'm in a group and I see something like that lonely sentential I would love to pull over.  Maybe with this group I could of?  Who knows.    All I know for sure is...I was enjoying the trip.

There were mostly sweepers - those long easy turns - on the route.  A few twisties - which I define as a series of sharp, quick turns - but generally speaking the ride was not that challenging.  It started in Lakeland, then worked its way into Bartow...then snaked down the back roads towards Frostproof.  We didn't see to many other bikers, or cars in some areas.  I waved thanks to a farmer in a John Deere tractor that pulled aside to let our motley crew pass by. 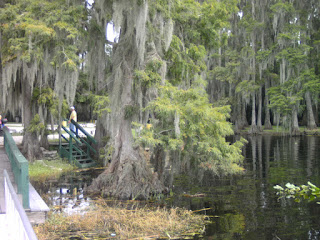 We ended up at the Lake Arbuckle campground.  I was told it was a favorite with the local painters in the area, and as I looked at the ancient oaks and low hanging spanish moss, I could understand why. My curiosity was peaked by the signs saying "Air Force property.  Keep Out" across the road.  A chain link fence and unkempt vegetation as far as I as could see kept what ever secrets were there well hidden.

After that it was to the restaurant for lunch.  When I realized that the ice cream place did not take cards, I did have cash but not enough to pay for a milkshake and a meal, one of the other riders stepped up and payed for my meal.  He refused to take anything in return or even offer his address for me to send a check to cover it.   Thanks Ed.  I did appreciate the gesture.

I also got a taste of Lakeland, which I keep forgetting about.  It's actually a pretty big city in it's own right and is home to not only the largest collection of buildings by famed architect Frank Lloyd Wright in one location but since Polk county has a agriculture history and a lot of swamp land however, it's considered "backwater" in a lot of ways.  The town has a variety of lakes in the town and surrounding the town, and as such is home to various waterfowl.  Including the descendants of Richard the Lion Hearted Swans.  The swan has become the symbol of the city and painted swans are found everywhere.   It's a place the deserves further exploration in the future.

Over all the ride was 159 miles (256 KM) for me.  I was not that hot, the lovely Sue gave me something that you soaked in water then "snapped" to remove the excess water.  It went around my neck and kept me cool (the jugular veins help to regulate body temperature).  I was surprised by how well it worked, sadly I don't have the name of it, but will get it somewhere in the future.  Of course, moving at a good pace and staying hydrated never hurt. 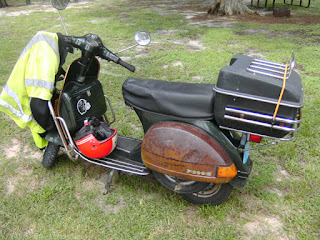 Posted by The City Mouse in the Country at 8:42 PM

I like central Florida a lot. Big skies and a small amount of elevation gives long views. Bok Tower, cowboy country, orange groves with real fresh juice in season and dammit I think I know why my P200 is overheating on long rides WOT. Restoration takes lots of trial and error and if that one can do it so can mine!

Michael - If you like I'll be happy to put you in touch with Robert (the P200) owner. I know he's always working on some restoration job and be happy to help you out if needed.

That sounds like one of those cooling towels you snap. They are nice. Hubby has one for when he teaches on the range.

It sounds like you had a nice group ride. I think all riders are friendly. If we had someone in our group who didn't have the cash for lunch because they didn't take cards, I'd like to think we'd all step up to the plate and treat them to lunch.

Robert, I need closer on those Onion Rings.

Living near Philly and in South Jersey Mom and Pop diners are a way of life. There's fierce competition between places on who has the best Cheesesteaks, Rubens, breakfast deals, and so on. I consider the best pizza to be from a place in the Poconos outside of Scranton, in a small town called Old forge, PA.

It would be one heck of a trip for you, but well worth it.