Growing popularity is not a good thing at times.

Nearly everyone I know that rides does so safely.  Helmets, gloves, jackets, boots, etc.  It just seems to go hand in hand.  Of course nearly everyone I know that rides has been doing so for years, and with that experience I'm sure they have gone down, scraped skin and broken a few bones.  You learn some things doing that.   Mostly it hurts and doing it again is stupid.

Scooters are popular here in Tampa, I see them everywhere in the city.  Now that one of the top pop acts in the world - Macklemore and Ryan Lewis (whose video "Downtown" appears above) - is singing about the joys of scooter ownership.  I'm sure we are going to see a uptick in the machines around town.

Which brings me to today's topic.   I had to deal with an accident yesterday.   I was not directly involved but I saw it happen.   I know why it happened.  Luckily the guy riding the Jonway scooter was not hurt nor was his little 50cc banged up badly.  I hate to say it...but in a way I was glad it happened, he was being an asshole.

He was riding in the bike lane avoiding traffic and that was fine.  Traffic was stop and go and at the time and he was zipping past everyone in the bike lane.   Then the bike lane ended.  No look over his shoulder, no turn signal, just over he came.  Traffic stopped, he continued to move forward on his little 50 cc.   I don't think he ever looked backed or used a signal.   Then he went to make a right turn. 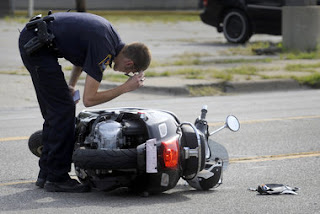 The loose gravel on the side of the road bit him and I watched the rear tire slide out from under him in slow motion   He had no helmet, no jacket and was wearing shorts.   Luckily the car behind him stopped or it could have been worse.   Being a trained first responder, I pulled over and insisted on checking him out.  He was banged up and bruised, but otherwise fine.   I was tempted to admonish him for his riding and tell him to at least buy a helmet (which is not required in Florida).

I've seen stunting on the highways.  I've seen people cut in and out of traffic with out doing a shoulder check or use turn signals.  I've seen scooters with out working brake or head lights on them.
If someone has read my blog for a bit they know how I feel about ATTGATT, how I feel about the little 50cc scooters that seem to be growing more in popularity.  Riding a scooter is a great thing of that there is no doubt.

Lets be realistic however.  It's a deadly little thing if you don't take care, obey the laws and be smart about things.  It's a battle the rider is never going to win and frankly I've been wondering what I can do to promote safety and common sense.  I can join something like the American Motorcycle Association  but honestly there are stands they take that I disagree with (such as helmet laws - which I feel should be mandatory - and lane splitting).

Law enforcement could do a better job of enforcing the motor cycle and traffic laws that already exist but I know those guys are often overworked and stretched thin enough as it is.  I've toyed with the idea of taking a few more classes myself and  become an instructor. Following in the footsteps of  Princess Scooterpie.  However I ride a scooter, not a motorcycle and although the advanced riders classes would not hurt me in any way, I'm not ready or experienced enough to be a instructor.  Besides the classes only work if you attend the classes.  How many riders are being trained by a neighbor or a friend?

So I'm going to call out those I see behaving badly, give a friendly warning where I can.  I used to wonder why bikers always told horror stories of accidents and such.  I get it now, we are just trying to tell each other "Don't be stupid and do what I did."

I think that's good stuff to pass on to the new riders.

Posted by The City Mouse in the Country at 8:16 AM

A good reminder that we all need to be hyper aware of our surroundings when we ride and that acting badly when on the roadways doesn't always end well. He was lucky indeed he wasn't hurt.

And as far as the video hubby and I were torn between WTF and kind cool when we first saw it.

Here in Oregon helmet laws are mandatory and so is rider training. If you want to get a motorcycle or scooter license in this state you have to take a Team Oregon class no matte your age. Some do, some don't and just take their chances riding without an endorsement.

I will never understand why different states in the US have different laws for this. In Germany (and we have also different states within the country) it is federal law that helmets and rider training is mandatory. And the tests are the same all over the country. Oh, and there is common sense, too ;-)

Glad, the guy got off so lightly. Hope he learned the lesson.

We have a thing called states rights in the Us. We fought a war over it, and the side with common sense won. If only there were motorcycles back then, helmet laws might be accepted now.

I live in a mandatory helmet state (New Jersey) and work in one without a mandatory law (Pennsylvania). I'd wear one no matter what, and never understand why one would risk riding without one.

Hope the rider learned his lesson. I wonder if he knows how lucky he was?

Vehicle laws in the US are always the responsibilities of the states. Sometimes the Federal government tries to impose a nationwide rule and withholds highway funds to get the job done. However as regards the helmet laws there is no compelling rationale for a nationwide helmet law: there is no nationwide single payer health care coverage (there should be)and the fact that people get hurt carries little weight in a country where tens of thousands get shot every year.
On the other hand Germany has speed limit-free highways and France requires riders to carry fluorescent vests.Cool but pointless if some German BMW is running you down at twice the speed of light.
Every time I think I am fed up with the crazy politics and religiosity in the US I come face to face with the tedious overbearing multi-state bureaucracy in the EU, I throw up my hands in despair and figure I just can't go back. Weird but here I am.
PS I exceed the absurdly slow speed limits in the US regularly and I ride the better for paying attention.

U.S. style light-handed government, no politician has ever uttered the phrase "God bless Canada", single payer health care, helmet laws everywhere, rider training mandatory everywhere, and we are polite to a flaw. But winters are long and brutal. You can't have it all.