Bruce Rossmeyer's - a legend in Daytona


Things have been a little hectic at Casa de Wilson.  Susan wants to keep things as normal as possible and I can understand why.

I've not gone riding in over a week, week and a half maybe.  The last long trip I took I knew I was low on air, and filled it up before the trip.  Then I rode to work and felt what could only be called a "wobble."  It may have been my imagination but no riding till I had the chance to look at it.  That finally came this weekend.  I was three pounds in pressure under the recommended air pressure.  I rode a bit afterward and guess what...no wobble.  So it may have been my imagination but I still feel a new front tire is in my near future.

Susan saw something about a Hawaiian shirt with Motorcycles on it.   I have a weakness for Hawaiian shirts, it's sort of "my brand" and started as a inside joke when I first moved to Florida.  I was told they were part of the dress code here and the rest they say is history.

So when the opportunity came to visit some of her family who had just moved into the Daytona Beach area, off we went.  Our destination was the famed Bruce Rossmeyer's Harley Davidson Dealership.

Frankly neither of us realized exactly how big this place really was.  It's a two story building with new and used bikes for sale.  Clothing and biker accessories, a tattoo parlor, a hotel, two restaurants and a cafe in the service bay.  I'm not forgetting the ice cream parlor, leather store, bike insurance kiosk, etc. In other words, if you're coming for Daytona Bike Week this is the destination.

The marketer in me has to admire their marketing strategy, and even though we did not pick up a Hawaiian shirt for myself (the cheapest was $60 and I'm a cheap bastard).  Harley does make some lovely bikes and I was impressed by more than a few.  I finally saw the 750 up close and I have to admit it's not that bad looking of a bike. 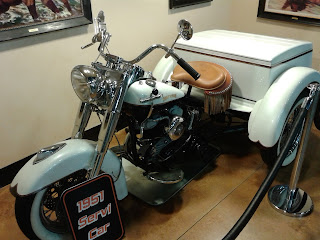 However I'm not wanting a bike because of the name.  If I did I would have bought the the BMW scooters when they first came out.   No, the next bike I buy will be well thought out and it maybe another Kymco honestly.

Harley is an American icon however, and Rossmeyer's is full of art, classic models and the history of bikes.  I actually wish I had a little more time, I would have loved to spent some more time wondering about and seeing what I could see.

Of course, by the end of that day I would have talked myself into something.  But we got away with a cute little shirt for my niece at a fair price.  I'm happy with that.

Posted by The City Mouse in the Country at 8:20 PM

Wish we had a Harley dealership in our area. I been getting mixed feelings, not so much about Harleys -- they are iconic, but the riders themselves. My neighbor down the street has a Harley, but is a complete gentleman. Doesn't dress the part. Is an experienced Engineer, and spends his weekends teaching men to read in the area's local prison.

On the other hand there seems to be a general consensus that Harley riders are arrogant, entitled, and seem to do the most to generate negative images and attitudes towards 2 wheel riders. I've tired to reserve my judgement to a case by case basis. However, or local Harley dealership offers Beginner and Experienced rider safety classes. I contacted them about taking the Experience course. A reply came stating that they had receive my letter and that they would get back to me soon.

So there I am. Not sure how or what to think of Harley riders or the company itself, For now I'll stick to my scooter. Like you I love my Kymco. If I ever win the lottery a BMW scooter may also be in my future.

I wear Harley boots and gloves. I find them well designed, comfortable and apparently created by people who ride. As to the bikes I am rather more enamored of the Indian Scout than the Harley Dyna which used to be my Harley of choice, if a choice had to be made.

The problem I have with Harley Davidson is more of a lifestyle thing. I (generally) ride to work in all types of weather. I (generally) try to ride every single day. When the weekend comes I suddenly see 1001 Harley's on the road. I see guys wearing no helmets or other protection going riding to their local "biker" bar and parking. Only to do it next weekend.

I bought my first scoot for a reason. To ride. Isn't that the purpose of owning a bike? I've seen and heard of to many Harley's becoming "Garage Queens."

My issue is not so much the company as the people that ride a Harley just to show it off. I know their are people that do more than 25K a year on them. Those are the people I want to associate with. Not a idiot with chromed out everything and 5K total on his "Hog." Rant over.