First ride of the new year

I had a couple of options Saturday, I had the chance to do a group ride.  A chance to meet up with an old friend for lunch. 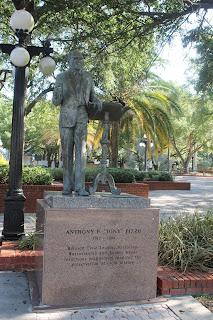 Instead I decided to spend Saturday working on the house first, taking care of some business second and "taking a ride" was actually fifth on my to-do list.   One nice thing about waking up really freaking early on a Saturday is getting 1 - 4 done pretty early.

I left about 11:00 AM.  It's finally starting to feel like fall/winter in Florida as the sky's were overcast with a 15% chance of rain.  The temperature was about 62 degrees F (16.7 C) when I took off.  I did have a destination in mind...but was not really concerned about getting there.

Every Saturday Ybor City has a farmers market.  It's small and really not that interesting but would serve as a good excuse to point Kimmie's tires in that direction.  I have recently acquired a taste for hard cider from Cigar City Cider and Mead as well as being turned on to a little coffee shop called Joffrey's.  You can thank one of my work mates for that newest addiction.

I was also thinking about riding along Bayshore Boulevard, which would provide some wonderful views of both the waterfront and the city of Tampa itself.  I had my camera with me, and one of the goals I have for this year is to take more pictures when I am out and about.  There are just to many interesting pole barns and lonesome cows out there that need a little photographic love.

However I love Ybor.  I found myself wondering about on foot and finding some interesting little stores.  I ran into a friend from work and chatted with him for a bit.  A phone call from my brother meant that I soaked up the new warm winter sun for a half hour or so as we talked about my mother and his daughter.  I meandered over to the Ride Factory which I've been told has the best mechanics in the city.  Like nearly all dealerships they had mostly low milage Harleys in stock, but their bay was as big, or bigger, than their showroom floor.   There was a early 70's Honda on one of the racks looking like it was off the showroom floor.  Another bike, which the mechanic guessed was an early 1940's BSA, was being lovingly restored.  Frankly I could not take my eyes off it. 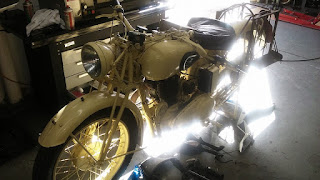 Sadly I had let time slip away.  I had to turn back, so I pointed Kimmie's wheel back north towards home.

That's okay though, it was a warm day now, the sun was at my back and I started back taking the long way.  I've been thinking about Ybor a lot lately because I've been kicking around a business venture in the area.  It's an up and coming area and their are parts of the city that can be had for a song.  If I and my partners do this right that is.  That however is another project, another song.

I pointed my wheels north and thought about how the New Year was full of promise...and what I would have to do to make those promises become fulfilled.

Riding Kimmie today was a good start, sadly starting Monday there was a damn good chance I would be off her for two weeks.   Ah, business..
Posted by The City Mouse in the Country at 6:13 PM

Sounds like a perfect start to the new year.

Nice to be riding Rob.

How about a ride down to Key West sometime in late-ish February? Let me know :)

That's the nice part about the Bay Area, lots of destinations, lots of opportunities for pictures.
Key West in February? Hmm that man is not enjoying Canada this time of year.