Today it's more known for being the center of Tampa's nightlife and gay culture.  Still though you can find old Cuban men rolling cigars, Italian being spoken on street corners and some of the best food in the city.  I enjoy Ybor because of its history, it's vibrant nature and historic buildings.  It's an area where young and old mix, chickens run about wild and free and tourists roam the streets with the natives.

If I was a much younger man I've no doubt that I would have spent many a night wandering about looking for excitement.

Ybor however is best explored by foot and not by bike.  Traffic can be a little insane and parking is at a premium.  Tampa is one of the few cities in the United States to still have a working street car line, which serves downtown and Ybor city almost exclusively, as well as the original 100 year old cobblestone streets. 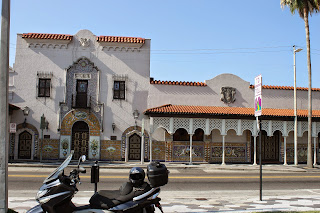 With that in mind I left early in the morning because I wanted to beat the heat and the traffic.  I still ended up getting off of Kimmie and walking about for a bit.  My first stop was the Columbia Restaurant.  Operated continuously by the same family since 1905 the Columbia has expanded to fill an entire city block.  It's menu and wine list have won major awards and it's often humorous to see someone in formal wear sitting next to people in shorts.  It's not uncommon to be seated next to a politician or a celebrity.  That's the Columbia.  That's Ybor city.

Local legend has it that during Prohibition, Ybor city was involved in rum running from Cuba and one night gunfire erupted.  The bullets are still logged in the walls of the Columbia to this day.  There are also secret passages and hidden rooms from the old rum runner days which management will be glad to show you one day out of the week, I think it's on Mondays.

Posted by The City Mouse in the Country at 6:17 PM