It's been a slow week - updates

It's been an odd week.  Due to a combination of work, weather, rain, vacations, and a host of other things I've ridden my bike a grand total of...twice.

Maybe three times if you count running to the store for a loaf of bread, a ride of less than five miles.  I came back from my little vacation to  St. Augustine and rode to work on a bright sunny afternoon.  Weather.com does not usually fail me, they were calling for a 30% chance of rain on the way home that night.  My normal commute home is 35 miles one way and, depending on traffic and can I make all the green lights, can take anywhere from 30 to 45 minutes. 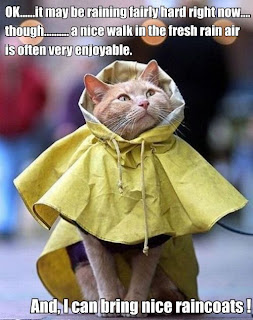 The rain started lightly, I didn't bother to put my rain suit on.  Experience has shown me that Florida has several different of showers...this was a quick drizzle.  There is also the "Florida Car Wash" - a harder rain that lasts for under 10 minutes.  I went through the drizzle.  Five minutes later it started in full, buckets of rain driven by a ever increasing wind.  Well not at "Hurricane" levels it was certainly miserable.

"So Robert" you may be asking yourself "why didn't you pull over and slip your rain suit on?"    Because gentle reader, I was in the middle of no where.  Despite this being a fast moving highway this part of the road has not really been developed.  By the time I was able to pull off under a bank's awning I was already soaked to the bone.  Putting on the rain suit by now was silly, but I did it anyway.  It did help somewhat on the last 10 miles of the ride.

I've been caught out in the rain before, and actually generally enjoy it.  I am a Rounder after all.  At night however it's another story, I am not worried so much about how the bike handles and my ability to handle the bike in the rain.  I worry about being seen, about a car speeding to fast for conditions and skidding into me.  I worry about the cagers.

That being said, Kimmie handles exceptionally well in the rain.  Where as my old beloved Burgman seemed sluggish at times, Kimmie's handling is a pleasure.  A 2013 Kymco Xciting weighs 473 pounds (214.5 KG).  The 2013 Burgman weighs 489 pounds (222 KG), you would not think that 16 pounds (7.26 KG) would make that big of a difference.  Kimmie does have 98cc more power as well, I've said it before and I'll say it again, she's a sport bike compared to my former, beloved Burgman.

Posted by The City Mouse in the Country at 10:54 AM

So, how warm was it? To ride "soaked to the bone" and still be smiling?

Rob, wasted? Hardly, I always enjoy your posts. Just a word though, I went down in heavy rain, and let me tell you, there is no warning. One minute you're up and the bike is handling well, and a split second later all it lost and you're sliding along the pavement.

I used to ride a Kymco X500Ri, the first year they came out. I rode it to Penticton,BC and then down to Oregon for the Maxi-Scoot rally.

I used to spend time on the Maxi-Scoot forum

it is a great machine

Nothing like getting soaked to the bone to make you appreciate the sunny days.

I am surprised at the scooter weight. My Gladius is only 446 lbs wet weight.

Robert I am glad you are enjoying Kimmie, even in the rain. Being a rounder myself I can most definitely empathize with being soaked and deciding whether to stop & change into gear or even out of it for that matter. Today it was warm then cold then warm again, I actually had to pull over and unlayer. I miss the storage factor on my scoot something fierce, and wish the motorcycle was a little more storage friendly that way.

David - I was in a perfectly dry area, making a slow left on some loose gravel and I felt the rear wheel start to slip out of me. I kept it upright and moving but my heart did miss a beat.

Living in Florida the way I do, I'm going to be caught out in it. I slow down, avoid the painted lines and puddles (could be hiding a nasty hole). I give the care ahead of me an extra second or two of time. Yet despite every precaution I take there is always that chance. It's never far from my mind.

One of the things I noticed about my People was how balanced she is. She does like to stay upright and I'm glad.

I, too, have been down in the rain. It was a tough lesson on the consequences of my tendency to grab the front brake. I've learned the rear brake is my rainy day friend. And as you said, slowing down a little and opening more space. Still...there is always that possibility.
~k