Update on the E2E and other randomness

May your trails be crooked, winding, lonesome, dangerous and leading to the most amazing view.  - Edward Abbey 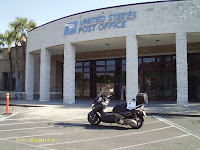 The first of the month is always hectic, always insane as I try to maintain the various magazines and publications at all the stores and other locations I supply.  So I've not really had much of a chance to go and ride.  I did get away for a bit though, which is why that photo of the post office is to the right.  There is a story behind it too!

As part of the Equinox to Equinox Rally, you get a few points for getting a photo of your bike, your rally card and a certain object, in this case the post office.  Seems easy enough...till a police car pulls up and wants to know why your taking pictures of the post office.  I showed them the card and explained the rally point system to them.   Then asked them to take me to the nearest police station was - after all it's on the list.  The officer was not amused.  I still don't have that picture.

I take it as a matter of personal pride to do my best and finish in the top 25. That's my goal anyway, and I don't expect my name in lights or songs to be sung of my riding prowess...a tee shirt might be nice however.  For me, its part of a bigger plan...I had set myself the goal of riding everyday in April, even if it was just around the block. I don't get to do that much "recreational" riding and am afraid that I'll become blase' about my daily commute.  Becoming to familiar with the road might mean I don't pay the attention to it I should.  Riding an unknown road, or at least a different road, is good for my soul as well as my skills.

There are snags however.  The state of Florida only has two national parks, neither of which are close to me.  Then there is the fact that much of Florida is under 100 years old, which makes finding historic markers and cemeteries (again on the rally "bonus" list) that much more difficult and challenging.  Much of Florida's history was only written in the last 100 - to 150 years and most of that was written in the panhandle.  The interior of Florida was not opened up until the 1900's and that was due to trains.

The more I seek out the historical Florida, the more I find.  I've always had a deep and resounding respect for history, so coming across a lone sign or finding some forgotten spot appeals to me.


At work we have converted another one.  That brings the total number of riders five.  Three of us are riding in pretty much every day.

So I sit here and ask myself...why am I not out riding?  Time to go!
Posted by The City Mouse in the Country at 10:22 AM

Rob, I can't imagine a cop taking an interest in anyone taking a picture here.

Although they are giving a young woman here a hard time for publishing on her facebook page a graffiti image of a cop with a bullet hole in his forehead. Of course in that case the police officer was recognizable as the spokesman for the Montreal police, so maybe she was way out of line. The graffiti itself has been obliterated.

Still, I have find peace officers in the US to be consistently humourless, overbearing types whose first approach to dealing with the public is to intimidate.

I prefer to live in the great white north than in the land of the free.

Well truth be told David...I am taking a little liberty in telling the story, all for dramatic effect! There was a police woman but she was more curious than upset.

She actually told me where the police station was in town (I honestly didn't know) but I've not made it over there yet.

I do agree however, they tend to be a humorless bunch.