Recently I learned via the local paper that the state of Florida was going to renovate the Sulphur Springs gazebo.  The more I read about this the more curious I became.  My adopted state is not prone to preserve it's history, it's coast lines, its communities...unless it feels that there is some way to make a dollar off of the tourists.  When people speak of "Old Florida" they don't refer to 300 years ago but the Florida of the 1920's and 30's.  Some even refer to the 1950's.

It seems that nearly 100 years ago the town of Sulphur Stprings was very well known and the local spring, which was contained in the two story, columned gazebo was one of the countries "health clubs" at the time.  Elegant carved maidens and the letter "R", for the owner/developer Josiah Richardson; who may have been one of the fathers of the modern shopping mall, ringed the building.  At one time the complex he owned on the same grounds contained various cottages, a swimming pool with a slide, a dance hall, Ferris wheel, bathhouses and; this being Florida...an alligator farm.  Also on the grounds was a European-style arcade with shops on the first floor and a hotel on the second floor.  Today all that remains is the water tower and gazebo.  At the time Ripley's Believe It or Not dubbed it "a city under one roof."  During the early part of the twentieth century many people believed that natural springs had medicinal value...and the strong smell of sulphur and a constant temperature of 72 degrees  made the springs a natural health club.


Richardson also catered to "tin can tourists", who traveled by camper.  "They would close in the truck, take a bed, build a little camper on it and come down to Sulphur Springs," local historian Linda Hope said. "Sometimes they would winter here. That's how some of the housing grew up."

By 1933 Richardson had gone bust, it was in the middle of the Great Depression and when the local dam on the nearby Hillsborough River burst, flooding most of Sulphur Springs, including the arcade. Richardson lost everything.  The local neighborhood continued to thrive through the 1960's.  However by the 1970's the area became crime ridden.  The springs have been closed to swimmers since 1986 due to fecal coliform bacteria.  Although the city has been slowly been investing in bringing the community back starting in 2000.  The city has established a local park around the gazebo and a 214 foot water tower that Richardson also built.  You can't help but notice the white concrete tower driving south towards Tampa.

Local legend also tells of the time when pirate ships would use the springs to replenish their water supplies.  There are supposedly still trees in the area marked by these sailors.  Sadly however my brief research could turn up nothing substantial to back up that claim.  Still however, it's a neat story.  That's the wonderful thing about history...we just have to open our eyes to it. 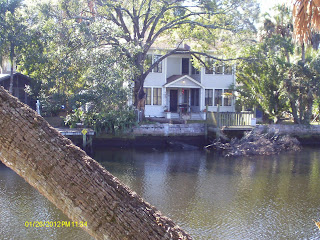 Posted by The City Mouse in the Country at 12:39 PM

Good historical writeup! I wonder if the state library has old photos of the city? It'd be good to show then and now shots....

The town I grew up in Michigan was a spa town. Nothing of that history remains either. It is sad. The town still exists but certainly doesn't have the hotels it once had...actually, it doesn't even have one hotel now.

I enjoyed your tale of this place. I hope it makes a comeback of sorts. That would make a very nice story indeed.
~Keith

Historically inaccurate. The tower was a water tower built by Josiah Richardson. You sip from that water youll go mad thats why its fenced in.The indians believed thats where the spirit of the hillsborough river lives and makes deals with mortals. Josiah sold his soul to the river and there was a very profitable vacation retreat/amusement park there. That tower stored water for the park and had VIP never finished suites