A boy and his toys.

I've a neighbor two doors down from me who, about a month ago, bought a Suzuki Boulevard GZ250S, I've seen him on it a few times and even waved at him a few times as he rolled on by.  I've not talked to him about his bike though, mostly because he is the type of neighbor that everyone calls "Mister" and is very rarely seen. 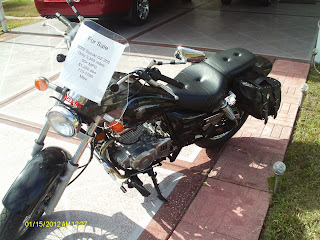 Yesterday his bike went up for sale.

It's a smaller bike of course, with less horse power than my Burgman 400.  I don't need another bike, and the Boulevard GZ250S is not going to work for me as a commuter bike - the roads I commute on require a bike capable of doing 60 - 70 MPH (96 -  113 KMH) consistently.     While the Burgman was really not designed for highway driving, it has little issue with being quick off the line and maintaining that speed.   Frankly I'm sure the Boulevard would not be capable of that.

What interesting to me about it honestly is that it's a "real bike."  Now don't get me wrong, I love the Burgie. I love scooters (after all the blog is named Scooter Revolution), but I've not ridden a "motorcycle" since my endorsement class.  Relearning the gearing, the clutch and how to operate all of them smoothly appeals to me.  It's also a good bike to learn on, being low to the ground and with lower power.  Eventually I will have to replace my Burgie, and as much as I would love a BMW, the long term girlfriend is pushing for a trike.  I will need to know that gearing unless I get a MP3 or a custom scooter trike. 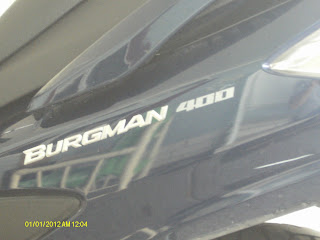 I also realized, that like it or not, the fact that I'm even considering buying a second bike means only one thing.   I caught the bug.  I'm doomed.  Doomed I tell you!  Logically of course it makes no sense, it's an extra expense that I don't need.  Still though...the idea has been planted.

Tis the season for Toys for Tots bike runs.  That time of year when the biggest burliest biker shows his soft side and gives a needy child a little bit of joy, showing that Santa does in fact exist in our hearts.  A friend of ours, Craig, was planning on going to one and we were going to tag along.  Sadly due to  an illness he was unable to go and I - to be honest - felt silly going to one all by my lonesome.  Even though it's for a good cause.

That's the wonderful thing about living in Florida, the riding season never really ends and there are two more rides that I know of between now and Christmas day itself that support this fine organization.  I know that some child, either girl or boy, will get a good gift.  After all isn't that what the holidays are for?

Posted by The City Mouse in the Country at 2:56 PM

Go for it! I rode a Honda Rebel 250 for my motorcycle traffic course and had absolutely no trouble keeping pace with highway traffic and outfitted with saddle bags it could work for commuting. The gearing is forgiving and would be a great starting point and not too much bike to get the shifting down. It's fairly light & easy to handle too. You won't have any resale issues because people are always looking for smaller cc bikes. It's funny because big bike or little bike 60 miles per hour is the same on both.

Yup - you've got the bug, I had three new to me bikes in my first year of riding and I still have 2 of them. Trikes are cool, but honestly I would rather have a bike with a sidecar rig and have been trying to talk my hubby into it, but he's not budging on it, someday! Go for it!

What year is it and how much is he asking?

Hey Dar, thanks for reading! It was a 2002 and he only wanted 1250 for it. He sold it within 48 hours of it going up for sale. I to would not mind a sidecar rig (seems more honest on a motorcycle) but the GF has some health issues that make a trike a little more attractive. But who knows what the future holds.