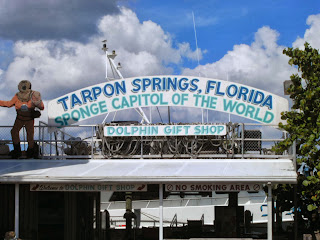 I've been meaning to ride over to Tarpon Springs for some time.  It has a almost European charm to it, with its brick streets and buildings dating back to the 1800's.  At one time it also supported the highest number of Greek-Americans in the United States and it's not uncommon to hear Greek still spoken on the streets.  The sponge docks are probably the best known part of Tarpon Springs, and at one time this was the "Sponge Capital of the world."  In addition the Epiphany celebration brings Greek Orthodox Christians from around the world to Tarpon Springs, literally tripling the population for the 1st week in January.

If you have been reading my little attempt of literary brilliance for any time, then you know I have a deep love and respect for history.  A place like Tarpon Springs just breaths it.  I wanted to explore the downtown a bit more, but Sue and I decided to head into town and explore the sponge docks proper. 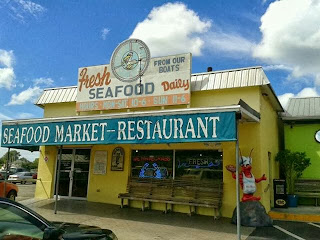 For some reason, and I blame the old people and tourists who never want to try something new, it's nearly impossible to get good seafood in Florida.  Sure, Talapia and Salmon are common - neither of which is native to Florida - but native and fresh finds are a rarity.  So when we decided to eat lunch at Rusty Bellies I had to order fresh fish.  Its literally caught by their own fleet of fishing vessels and then brought to the kitchens.  The shrimp I had may have been the best I ever tasted.

Tarpon Springs is full of funky little shops of course, selling natural sponges and lots of little tourist knick-knacks.  Also a insane amount of belly dancing outfits.  It was a nice day to wander around on foot or on the bike taking in the sites, including a little dog in a sidecar.  Sadly we were unable to get a pic even though we kept seeing him driving about.  The timing just never worked out.  What is it about a dog in a sidecar?

We decided to take a little boat trip out to Anclote Island, which is a state park and has a lighthouse dating back to the 1880's.  Jose Gaspar, Tampa Bay area's almost mythical pirate, supposedly buried all or part of his loot there. What's truly interesting about the island to me is the various species of birds that call it home.  We were both a little disappointed in the tour boat that took us over to the island.  We were thinking it would include a sponge diver demonstration but the ship simply took a two hour tour out to the island.  The tour guide was knowledgeable and fun but over all I didn't think it was worth the money.

We were not even five minutes from the dock when we came across a small pod of dolphins which were in a very playful mood.  There were three or four of them (I learned that pods of dolphins are almost exclusively female) that enjoyed putting on a show, leaping and jumping just a few feet from the boat.  They also enjoyed teasing a dog on the docks.

The ride over was uneventful but noteworthy for the fact that this was the first time Sue and I have rode two up at highway speeds for extended periods of time.  Kimmie handled it very well and was able to handle the extra weight well.  It was also the first time I've handled 2-up at night, as we did come home as the day faded.  All told we put about 110 miles on Kimmie...and she even handled a sea gull pooping on her with dignity and class.  She really is a good scoot.

Overall it was a wonderful day indeed.  Working six days a week like I normally do any time I get to take off for a bit and get out into the world I'll do. This coming Saturday we hope to ride up to a Fall Festival in Spring Hill with two new friends of ours (despite the fact that they ride a Harley).    Some additional pictures follow: 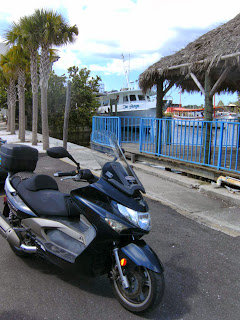 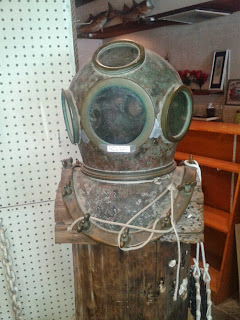 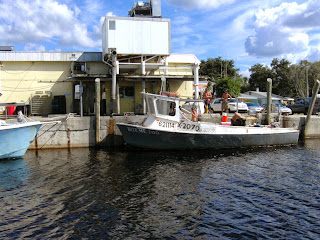 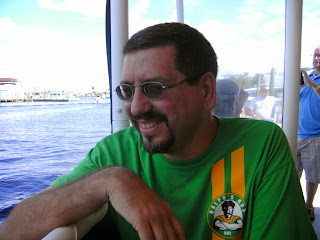 Posted by The City Mouse in the Country at 2:02 AM

I literally have about 50 cumulative minutes of riding two up, most of it no faster than a leisurely school zone pace. One of my sisters was brave and allowed me to take her for a 10K ride and we hit speeds of maybe 40 mph.

I like reading your posts that explore the west coast of Florida.

I have been through there only once, when one of my nephews was studying for a while in Tampa. We had spent a few days in Disney World, went to visit our nephew, then went down the west coast to Alligator Alley and over to our usual stomping grounds in Fort Lauderdale and Hallandale.

It looks like a fun day. So cool that you got out for a longer two-up ride.

I like the dolphin photo. There is just something about it with the blue sky and clouds combined with the dolphin and reflections.