This coming weekend was going to be busy.  There was a lot going on that demand my attention.  First was the AIM Expo in Orlando.  Like I mentioned in my last post; I really had no desire to go in the beginning but as the event approached the seeds of excitement grew.  The idea of looking at new farkles and trying out
new bikes appealed to me.  The event certainly peaked my interest and I had was certainly tempted to go.  I will also admit the interest in the expo would drive up my blog numbers and I want some neat swag.

My Tampa Bay Rowdies were also playing on Saturday night.  They are currently in second place in the standings and are pushing hard to defend their championship from last year.  There is frankly no room for error in the last three games and the reborn New York Cosmo's would have to collapse.  The odds are stacked against the Rowdies but soccer is a funny old sport.  I've not been able to attend as many games this year as I would have liked but with only two home games left I am running out of time!

Saturday is also the Rattlesnake Festival in nearby San Antonio, FL.  Just another of those goofy little festivals celebrated all over the United States to boost the local economy for a day or two.  I enjoy going to these little things simply because where else can I see Gopher Tortoise race? 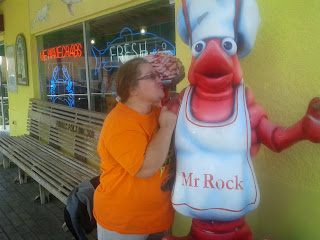 This Saturday is also Sweethearts day and Sue and I had not been on any romantic adventures in some time.   The Bahama's cruise was more about my wanting to ride in a another country.  What romantic thing could I do that involved us riding on the bike?  Could we create our own Roman Holiday?  Two weeks ago we traveled to Tarpon Springs by bike and it had been a wonderful trip.  The last weekend we visited Strong Tower Vineyards and overall had a disappointing trip.  We drove up in the car and was disappointed in the wine and their fall festival overall.  The event was to small, there was nothing to do other than sample a rather poorly made wine.

As I write this I have a few things in my mind.  A few ideas forming.  The first was taking her down to a glass blowing workshop where she would learn to make her own pumpkin, to complete her love of Halloween.  I even went as far as ordering tickets...only to realize that the workshop I ordered the tickets for was in Corning, New York.  A red faced call to them got the issue resolved, much to their amusement.  So much for the world wide web!

At this moment I am not sure what I will do.  I know I seek adventure, but a little bit of romance is never a bad thing.  Getting out of the house to do something...anything is never a bad thing.  Even just having her wrap her arms about me and saying "Lets go." is a good thing.  A picnic on the beach, watching the sun set into the Gulf while reading poetry.  Trying new food at Veg Fest.  I want whatever life has to offer me.

Working six days a week like I do, staying at home is good too.  In the words of the immortal Jack Kerouac, who died some 44 years ago this week:  “Live, travel, adventure, bless, and don't be sorry.”  Speaking of Jack, another venture starts to form in my head.

Posted by The City Mouse in the Country at 1:52 AM

Wow, you have been busy. And you still have found time to blog.

Let us know what you thought of the Expo and VegFest if you go, We went to VegFest inPortland and man was it busy. Same venue and dates as the Rose City Comic Con so we dubbed it Veggie-Con.

Trobairitz - this post was more about the possibilities of things. Sadly do to Sue feeling a little under the weather on Saturday we decided not to go the Expo or the Veg-Fest (which I think I would have enjoyed). We did end up going out...your going to have to wait for the next post however to see what we did. :)