The Bahama's - A little jaunt with memories that last a lifetime.

I was trying to pay attention to the road, trying to keep my eye on my girlfriends daughter who, while having riding bikes and small motorbikes, had never ridden a scooter this far, this fast before.  I was riding behind her in front of the tail-gunner and trying to keep an eye on the rear view mirror of my little Yamaha for the jeep that my Susan and her mother had rented to follow along.  I didn't have much to worry about.  Steph handled the scooter very well, she scared me twice (once where she took a turn to quick and stuck out her foot) and another where she was looking at the lovely countryside and not paying attention to the road and nearly missed a turn.

My ride was a little cramped Yamaha 100 to 125 cc, it was more than a little hot but the traffic keeps moving in the Bahama's thanks to only a few stop lights but what seems like 101 traffic circles on the island.  It kept the air moving.  I had learned about the trip through the Shiftless Scooter Club and the Palm Beach Scooter Club.  As I sit here safely back in the states I find myself wishing that I could have spent more time there.  The people of the Bahama's are amazingly friendly and helpful, not asking for a dime when we required assistance (more on that in a bit).  The roads were in very good shape and there were enough twists to keep it interesting, but not particularly challenging.

I went to ride somewhere new, to visit another country and see things that I may new see again.  To explore history, to meet the people.  For the community and joy of riding with other scooter lovers.  I went to dip my feet in the bluest water, to buy things for family and friends...just to get away from the daily stress of life.  To drink.

The guy that lead the trip I've ridden with once before in a group setting.  He's and excellent leader, finding a pace that fits all the riders and keeps the group together in a tight formation for the most part.   I admit I probably drove the tail-gunner (a guy named Jack) a little crazy as I often fell back a little bit to take in the Bahama's scenery and to give Steph more than ample room to steer.  Again it struck me that I was more of a solo rider than anything. 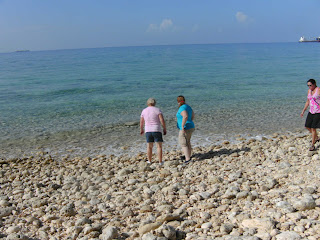 The group stopped at a stony beach with some of the bluest water on the planet and more than one person dismounted to dip their feet in the water or look for shells and coral.  My lovely Susan and her mother had volunteered their services to transport these treasures in their rented jeep beforehand.  Sadly 5 or 10 minutes later we were again on the road.

We passed lovely old cemeteries, beaches, churches - one of which looked as if the hand of God itself and twisted the metal (I will link the ride video here once posted).  I can understand why a lot of bikers get interested in photography...you want to remember these things.  Riding alone I'm able to stop and explore and read the signs, talk to the locals.  Groups just keep on moving. 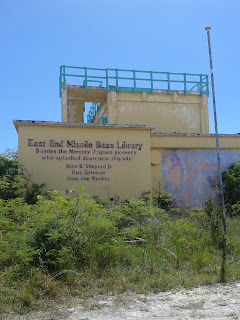 When traveling in a foreign land I am always struck how the people live, what is important to them.  Well many of the homes we passed would be considered "shacks" by US standards, I was impressed that for the most parts the yards were clean and neat, I saw a few gardens about.  The people were friendly, beeping thanks as I waved a few by.  When Sue got lost in a roundabout and drove some 15 miles out of the way, a very nice woman insisted on showing her the way back...not taking a dime for her troubles.  "Your a guest in our country" is all she said.  One could just sense the pride the Bahamian people had in their country.

We had lunch in a little local restaurant where a story was told that the owner of the scooter place received $1 for everyone that ate there on his recommendation.   The food was good but frankly to Americanized.  I would not have minded a little bit of the native food, a little taste of the islands.  Instead I settled for a Sands beer.

Thank you people of the Bahama's.  You made the trip wonderful.

As we headed back home to Tampa I showed off a local free attraction called "Spook Hill"  to Sue's mother and daughter.  They were not that impressed. 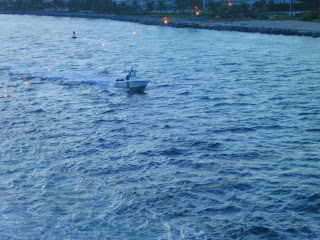 Posted by The City Mouse in the Country at 8:37 PM

It sounds like a great time. I've never been there but you make it sound lovely.

Glad that Steph seemed to take to scootering. If she wanted to put her foot down, she'd be great at dirt biking.

Nice! What a lovely vacay!

Been to the Bahamas half a lifetime ago. Sigh! What a lovely place to spend your vacation, even better when scootering is involved.

I find it is hard to strike the right balance when traveling by bike. Do you pull over and take pictures or keep on enjoying the joys of riding? The beach looks pristine! I would have liked to spend the afternoon there!

David Drouin said "I find it is hard to strike the right balance when traveling by bike. Do you pull over and take pictures or keep on enjoying the joys of riding?" I pull over and take the pictures. The ride is part of the enjoyment for me but it's only a part. For me part of the joy of riding is the back roads, the history you find and the people you meet. Part of the joy is the weather, the bugs, the wind rolling across my body. The smell of the flowers on the roadside. You don't get that riding in most cars. So if something interesting catches my eye...I will stop in a heartbeat to follow up.