I caught a glimpse of her in the mirror today.  We were on our way to breakfast at IHOP and Sue was tucked in behind me.  I could not make out her face in her new helmet but I could feel her hands around me and the press of her body on my back.  She was buying breakfast and I could not have been in a better mood. 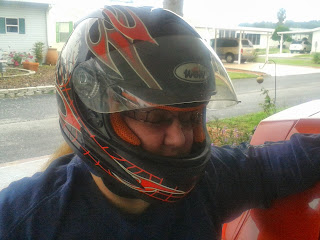 I knew I was in trouble when she mentioned her wanting to buy some sort of communication device so she could talk to me when riding.  How Christmas was coming up, and my birthday a few short months after that.  In other words, I should expect a communications headset.

Sometimes I catch a look at myself in my gear and it's odd to think about everything that is now in my closet that is biking related.  We now have four helmets, four sets of gloves, three sets of jackets, two pairs of boots, two sets of rain gear and a partridge in a pear tree.  We have come a long, long way from a canary yellow pullover and a shiny half helmet  Well it may not be the best gear it does serve a purpose, and hopefully we will never have to test our gear.

Now that fall is coming, we should be riding more as a couple.  It was incredibly hot and humid this summer, we didn't ride nearly as much as we could have.  The heat also effected my participation in the Equinox to Equinox rally.  I finished a very respectable 13th at of 202 participants and met my goal of a top 25 finish.  I managed a total of 291 points.  If I had continued to play I have no doubt I could have finished in the top ten, maybe even the top five.  You can see my various photo's here:  I was # 096.  Well I enjoyed it, I have to admit that I am not if I would participate again.  It just seemed it to long.  While the guys at the Pace Podcast do a great job, I just feel they just bit off more then they could chew.  It would have been nice to have had updates, either on the podcast or the website, regularly.  We will see what they have planned for next year.

Finally, I love a love a good adventure story.  I love travel stories and - at the risk of being called a "wimp" or worse - romance stories.  So when I came across this story on Scooterfile I had to follow up on it.  It seems that a young man fell in love with an idea.  To ride from Canada to Peru on a 150cc Lambretta.   Now that would be crazy today...but in the late 50's?  Perfectly insane.

One hitch in his plan. He met the woman he would marry three weeks before hand.  He still goes on the trip, and then, showing what must of been a sure sign that he was crazy in love.  He asks her to marry him and come on the journey with him.  You can't make these stories in Hollywood.  Unless you throw in an alien invasion or Zombies.

His son is trying to put together the money to tell his parents story.  From what I understand it's just a question of getting the money for the printing.  You can read more about the Bowman's adventure on their Kickstarter page.  The official website is at The Scooter Diaries and goes into much more detail about the project. Of course, their is a Facebook page as well.   It's an interesting story and worth looking into.

Posted by The City Mouse in the Country at 2:26 PM

Congrats on doing so well on the E2E rally. I sucked (only 5 pictures) and just didn't have the motivation to go our for points. Our summer was so hot and dry. The driest Jun, July and Aug on record and now we have had the wettest September on record - go figure.

Oh and beware - moto gear multiplies often. It seems like you have already figured that out. I buy new stuff and haven't gotten rid of the old stuff. Some I've given away to try and pay it forward but it isn't always easy to find another lady rider the same size.

Helmets, gloves, jackets, etc they all add up.....

The Scooter Diaries seems like a really interesting project. Whenever someone undertakes riding from North America to South America I am always reminded of the Darien Gap. How do they overcome that section of unpaved jungle wilderness between Panama and Colombia? I think most people fly, but how badass would it be to go off-road on a 150cc Lambretta.

Good for you on your finish in the rally! I was going to do it, but then gave myself a reality check because I just couldn't seem myself finishing it. Maybe another time.

It's amazing the amount of gear we amass with regards to riding. I found I wear it out pretty quickly too with the amount of riding I do and adjusting it for weather. I was going to buy a new mesh jacket this year, but put it off because in reality I only use it for 3 months out of the year, it just isn't hot enough in the evenings.

I love reading about adventures by scooter or bike, particularly those who do it on smaller machines. Very cool!

I hope you guys enjoy your cooler riding season!

My Dad had hoped to cross the Darien Gap by scooter, but hadn't actually researched it. He got to a military checkpoint where they were turned away. Apparently women were simply not allowed to cross (too dangerous they said) but it didn't matter because it was completely unpassable by scooter anyway. They were forced to backtrack and fly over it, feeling cheated. I know it was eventually conquered by some guys in a Land Rover though. Just to make it a little difficult though, the airline completely lost their scooter for 10 days. :)