I just don't know yet. 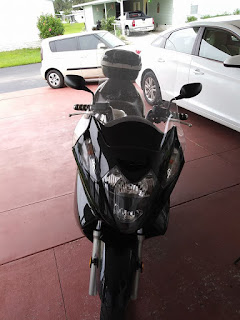 
A woman in my community is selling her former husband's Honda Silver wing.  She is asking a fair price for it and Sue prompted me to go and take a look.    Sue knows how much I enjoyed riding and owning a bike.  The owner told me the year but I don't remember exactly.  I think it was within five years old and she had a tad over 17K on her.

In didn't take me long to grab an old helmet and a borrowed set of gloves to take her for a test spin.  I'm not sure why I consider motorcycles women, but to me they are. 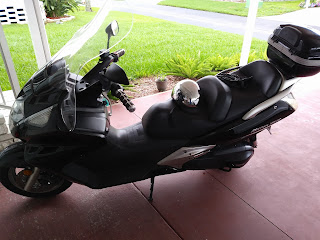 So I started her up and she didn't roar to life, she didn't have the "oomph" that Kimmie did despite being a bigger engine.   Of course, she was also a bigger, heavier bike than my old Xciting and that matters.

I rode her around a bit, through some local twistie's I know of on a back road, I opened her up slightly on a straightway and I did feel comfortable, despite wearing none on my safety gear except a pair of borrowed gloves and an old helmet I picked up somewhere along the way.

It felt.....odd.  I don't know what I expected, taking her gingerly through a turn.  Where was the excitement?  Where was the feeling of awe?  Of being on the edge?  The tires seemed a little squirrel'y but they were brand new, still having the nubs on them and the bike had sat for about a month  so the pressure was probably off.   I took my time and was careful.

I knew I was also probably gun shy too.

There were things I like, the former owner had put a Givi windshield on it and that would come in handy on the cooler days or in the rain as the wind and rain where whipped around me and not into my chest as with Kimmie.   The storage was nice, and the previous owner had placed a pretty decent, but now great top box on it.  All the storage departments locked with a singe key.  He really did take good care of the bike and it had undergone a full maintenance review about 1000 miles ago. 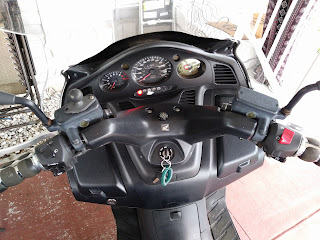 Maybe it's just the fact that I never really cared for the looks of a Honda Silver Wing.  Maybe I'm still afraid, still touchy after the accident. Truthfully Sue and I can afford the bike and still have a good chunk of change left over, so I can't say "I can't afford it."

To me life insurance is the peace of mind. With as many miles as hubby puts on bikes I expect one day it may not have a happy ending, but I know how much he enjoys it and we both have life insurance. That way if something happens while one of us is on two wheels or four we know the other would be taken care of.

Take your time and think about it. These are natural. I've had them myself and have thought about stopping riding and then I go for long meandering tootle and I am in love all over again.

It's fun to test ride, but if it doesn't "grab you" then it isn't right, ya know?

I test rode a Yamaha S Max last year thinking it would be my "dream scooter". Not. At. All.

Maybe get another Xciting?

Enjoy whatever you ride!

Love checking out your blog! Always a great read, thanks for the share!

Great blog! Thanks for sharing and updating it