This may be the final post I make on this blog.


As some of you know, I was involved in a motorcycling accident on Saturday, December 17th 2016.  It was completely and totally my fault and was the third such accident I've been involved in in the six or so years that I've been on a scooter.

It may also be my last.

I made a promise to the woman I love that if I was involved in a third accident that I was done.  I fully intend to keep that promise, interestingly enough Susan is seeing this from a different perspective than I am,  She thinks that I should continue to ride, although on a three wheeled machine.  At some time in the near future I may change my mind and climb on a bike again.  At this time though...I'm done.


My day started simply enough, I was riding around on Kimmie through Zephyrhills and Dade City.  I had a plan in mind to slowly make my way down towards Ybor City and my favorite watering hole.  It was a clear day, warm and sunny.  I jumped on the highway and started making my way down towards Ybor.  I don't like riding the highways because things can happen so quickly but at the same time they are open and give you a bit more "escape routes" if something does go wrong.

I was less than 5 minutes from my destination.  In an area that I know can have stop and go traffic, I was traveling in the far right lane near the emergency exit lane for that very reason, leaving myself an exit lane just in case.  That just in case happened.  The brake lights of the car went on suddenly and I saw them a second or two to late, pulling back hard on my brakes...then I started to aim to the emergency lane....then, sadly, I ran out of room.

It's funny how the mind works, I don't remember hitting the car or going over.  I do remember the tumbling.  I can tell you exactly where my visor broke off my helmet.  What I was thinking..."Try to tumble away from the car"..."That's it...I'm done riding."

I'm not sure where I stopped but I knew it as I slowly got up.  Something, somewhere, was seriously wrong.  Nothing felt broke...I was in pain but that is understandable.  I went into diagnostic mode.  I was lightheaded and sick to my stomach. I was conscious but dizzy... "Call 911."  I told the other driver.  "I'm seriously hurt."

I took off my helmet (which on second thought I should not have done) and watched another biker set Kimmie upright.   A 30 second look told me all I needed to know...poor Kimmie was dead. The biker and I exchanged one or two words.  Than another biker pulled over.  The other driver let me sit in her car and I laid down in her back seat. 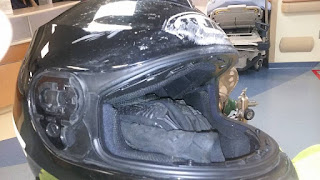 It took longer than I would have liked but the ambulance showed up shortly.  My blood pressure was 70 over something.  It was low, to low...I had guessed right, I was going into shock.  They started a IV with saline solution and within a few minutes my pressure started to climb.  Now the EKG was showing something that worried them.

So I'm lying in the gurney in the emergency room hallway, trying to stay lighthearted as each and every Doctor and Nurse that pass thank me for wearing a helmet.  Even the cop that takes my statement thanks me.  The nurses poke for blood work that needs to be done, as the machine I'm on beeps intermittently.  One of the doctors tells me they are keeping me overnight because they think I may have had a very mild and very brief heart attack according to the EKG.  But they won't know till the blood work is in.

So I am staying the night.     All the blood work, thankfully, comes back negative and the EKG settles into a pattern that the doctors feel is normal.  No heart attack...just shock.

Overall things could have been worse.  I have scrapes, I have bruises.  I have sprains and swelling.  I had to suffer the indignity of going to the bathroom in the hallway. I am however very much upright and alive.
It could have been much worse.

It's not the accident that got me scared.  Going down is part of riding.  If your afraid of that...then you should not be on a bike in the first place.  I already miss riding, I truly do love the freedom and peace of mind it brings me.  I was finally starting to feel "part of the local two wheeler community" whatever the hell that means.

Kimmie and I had plans.  Plans for longer trips to the center of the state and to explore the south of Florida a bit more.  I was planning on running her down to my favorite winery in the state sometime after the new year.  For the first time in a long time the future looked bright for Sue and myself, and getting out on the bike was part of that future.  I had already managed to put some 6000 miles on her, which was about 1000 more than I had in the last two years.

For hitting the back end of the car and a scary hospital stay, I'm actually in wonderful shape.  I have bruises and scrapes to my knees and a nasty abrasion to my right foot.  My left wrist suffered some soft tissue damage but nothing that time can not fix.  I walked away...thank God for good gear.

What "scares" me is hearing the fear in Susan's voice as the paramedic tells her they are taking me by ambulance to the local Hospital.  What scares me is her telling me...that she does not want to buy a funeral dress anytime soon.

What scares me is my elderly mother and father not being prepared for their son's demise.  What scares me is putting anyone through that.  Riding is selfish.  It brings pleasure only to ourselves, but in a case like this, it shows it's ugly side.  Accidents effect everyone...even if they are not on a bike with us.

I know...I know.  It's an accident and accidents happen.  Funny thing is that this one is my own fault and I know it.  A second or two longer and it would not have happened at all.  Playing "if only" games however don't change facts.

So I'm not really sure what the future holds at this moment.  I may climb back on a bike within three weeks or three months.  I may sell what good gear I have and never climb up on it again.  I can honestly say I don't know. 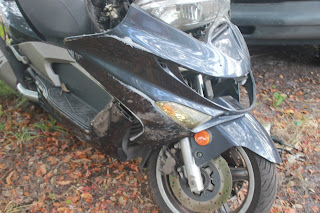 I am however going to say this.  Please, please, please get good gear and wear it at all times.

Be Well and Ride Safe.

Rob Wilson
Posted by The City Mouse in the Country at 10:54 PM

I'm glad you're okay, and smart enough to follow
ATGATT. The decision is yours, and I'm sure folks will support whatever decision you make, but I'm a firm believer in being selfish sometimes.

Another testament to wearing riding gear.

So glad you came out of it with just a few scrapes and bruises. It will be up to you and Susan whether you hop on two or three wheels again or decide to stay on four wheels.

Rob I am so sorry to read this, and so relieved you came through with minimal injuries. Another reminder of the critical importance of wearing good gear.

Rob, I missed this post in December things were a little hectic. I am glad you are ok and that your gear did it's job well. If you decide not to ride that is awesome, if you decide to ride, that's awesome too.

Hope you are doing well now. Best of luck

Any updates mate?. Hope you are doing well.