A run of bad luck

Where's the crime in a streak of bad luck? - Jay Farrar


I woke up this morning and glanced at Kimmie.   Shining like a star in her rear sidewall was a roofing nail.  It was simple chance that I picked it up.  It was the third or fourth thing in a row.  A streak of bad luck. 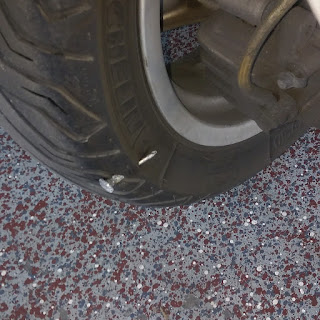 I recently sank $80 on a new battery and I'm concerned about why I'm only getting a year or two out of a battery.  The other day I got stuck on the side of the road due to my running out of gas.  My gas gauge has been down and I don't see any reason to replace it...since I know I can go about 150 miles on a full tank.

Except my tank wasn't full.  So I got stuck on the side of the road waiting for my lovely, and very angry wife, to bring me gas.

Now I picked up a nail and I know that a rear tire needs to be replaced.

I've been using Michelin City Grip's on my bike. I've been happy with them and see no reason to change.  I know however that I'm looking at about $80 for just one however.  The tire I've on Kimmie now is relatively new.  I could go with a cheaper Shinko but would prefer the performance of the Michelin.

It's just another expense.  One that is not needed at this time....and one that I have to pay.

Even though the tire was not losing air and I don't believe the sidewall was damaged, I decided to replace the tire.  I would rather be safe than sorry.

Posted by The City Mouse in the Country at 11:27 AM

Why would you change that tire? It doesn't look like the carcase has been compromised.

Actually that nail is in not to bad of a spot, I think you can pull that out and the tyre will be ok still.

As Troubadour would say: "If it wasn't for back luck I wouldn't know what good luck was."

Lets hope your luck changes around for you. Glad you spotted it in the driveway.