Passing through - 2016 year in review

Despite the crash and relative bad luck that was November and December of this year...I can honestly state that 2016 was a good year at the Wilson home.

My dearly departed Kimmie and I managed to put some 6000+ miles on her before her death.  It's hard for me to believe that a mere 3 weeks ago I was looking forward to the adventures of 2017.  Now we are in the closing moments of 2016 and I'm seriously debating if I'll ever get on another bike again.

It's been a year of connecting with old friends and making new ones.  It's been a year of kitchen remodeling and getting involved with projects that took up a lot more time than I originally expected they would.  While I loved having Scooter Bob here, I was unable to do everything I wanted with him due to my work schedule and other issues.  He hung out with the cats a bit more than I would have liked. 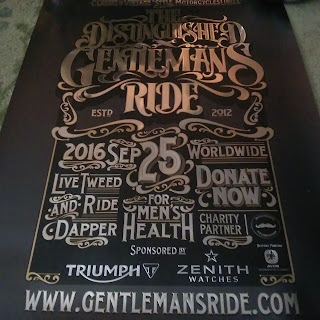 I raised over 600 dollars to help fight Prostate Cancer and Men's Health issues.  I received a very nice imprinted poster for my efforts.  As well as a wonderful feeling that I was part of something bigger than me.  As I rode with some 150 other bikers in and around the city of St Petersburg and Tampa proper I was truly the happiest I've ever been on Kimmie.  I'll probably have that poster framed one day, although I'm not sure where I'll hang it.

It was a year where I finally got out of my comfort zone and rode out to the central parts of the state.  Spending time in Winter Haven and around Orlando.  These are roads that I wanted to spend more time on in 2017.  It was nice to finally take the time and ride over to St Pete and that part of the Tampa Bay area in general.

I guess that won't happen now.  Or at least not for some time.

For now I'm looking at physical therapy although I do feel relativity well.  Despite a overnight stay in the hospital because of the accident I walked away from it more or less intact.  This one though...honestly has put the fear of God into me.

We will see what the future brings...but I could not let the year pass without some sort of review.  Some thing to keep up with tradition.

So I want to wish each and everyone a Happy New Year.  May you be healthy, safe, wealthy and wise in the coming year.

Posted by The City Mouse in the Country at 8:58 AM

2016 was an interesting year for you.

Lets hope that 2017 brings many good things your way - health, continued happiness, and all that good stuff for you and Susan.

Happy New Year Rob. I hope you get back on two again, but can definitely understand the "fear" factor involved. Just give yourself some time and space to see how you feel about things in a few months. Cheers!