The logic or lack of logic in my getting a bike.

I am a new rider.  When I first thinking about getting a motorcycle I went through every emotion that a person can go through and I'll admit I thought about it months before I finally bought a used scooter.

It seemed that everyone had a story where either they knew a friend of a friend or knew someone directly that had lost a direct head on confrontation with an 18 wheeler.   "They are called donor cycles for a reason."  "Your going to be road pizza!"  I imagined my mother saying.


But at that time gas was quickly approaching the $4 US mark and the bike that I was considering buying would average about 70+ miles (113 + km) per gallon.  At the risk of losing you completely, lets do some math. 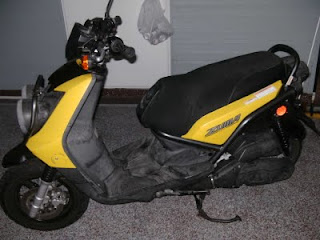 It was a Yamaha Zuma 125 stock (meaning it had no upgrades).   I found a blue book value for it and truthfully I overpaid.  I figured about 3 years of riding it however would pay for the bike, and that was even if I rode it 75% of the time.

Living in Florida gives me an advantage over most riders, in that I can ride nearly all year and motorcycles are a pretty common sight here as well.  That does not mean they are any safer but, in my twisted logic at least, meant that I would be a little more visible than lets say in my home state of Pennsylvania.

My commute at the time was only 15 miles (24 km) one way, flat and more or less straight.  The 125cc engine could easily keep up with city traffic and my commute at night (I work till 1 AM most days) would be on more or less empty streets.   I felt safe.

BUT first...a shiny helmet which I hoped would reflect light when driving a night.   A bright yellow jacket.  Anything to make me a bit more visible.    A simple mantra that I would repeat..."Cocky will get me killed."

So I started to ride.   In the parking lot at first, then in the side streets around my home at the time.   Then simple jaunts up and down the busier roads to Subway or the market.   Then work.   Then before you know it something happened. 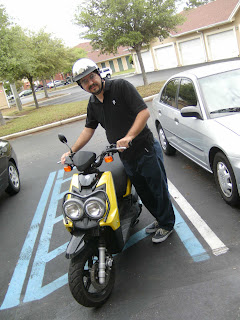 I started to relax, to enjoy the ride.  What started out as a logical way for me to save some money turned into something else, I realized it one day when I jumped on the little bike just to ride...and got lost on the back roads, not caring.  I started to look for excuses to take the little scoot out.

Now I understood what my biker friends where talking about.  Complete and total freedom.  A stupid grin on my face.  Life on 2 (smaller) wheels was not so bad after all.

Then something happened.   I bought a house which was about twice as far as I was before from work.   My little Zuma 125 had a top speed of 55 mph (88.5 kph) and that would not cut it on the highways I had to travel.  So with only a few months of riding experience under my belt I had to upgrade.

Again I had to consider my options between a Scooter or a "Real Bike."

Posted by The City Mouse in the Country at 12:47 PM

Nice blog Robert. I started my blog as a kind of thank you for the great information I got from forums (in my case the Modern Vespa forum) and scooter blogs. It`s nice to read about the beginnings of your commuting life on two wheels, because you are experiencing many of the same things I did. Although you've moved up to a bigger bike faster than I plan to.

Keep up the blog, I enjoy reading it and I'm sure many others will as well. I'm linking to it, and subscribing as well.

Good post. I've always found it interesting how some people get truly 'bitten' while others ride for a while and simply lose interest. But it sounds like you're hooked, so ride safe and enjoy!

That is a great story about getting into biking. Doing it to save money is one reason not many choose to start riding as most who ride did so when young. What I really like is the part when you started to take the scoot out just for the sake of riding, with a big smile on your face!