"One's destination is never a place, but a new way of seeing things."  - Henry Miller

Lately I've been thinking about how I ride.  I am about to enter my 3rd year as a rider, if I include the several months that I rode my old Zuma 125 about town.  In the first year, I concentrated on keeping myself upright and alive.   In my second year, techniques...now I'm entering the most dangerous year of all.   Where I know enough to be dangerous and overconfident in my ability.

My concern is backed up by the Hurt Report (the irony of a motorcycle crash study called the Hurt report is just to perfect) which does show that accidents are more likely in the first and third year of riding.  Having that knowledge will hopefully make me just a little bit safer.  If David Hough, who is universally considered the expert on Motorcycle safety, can get hurt then anyone can. The article on his accident is here.   The best safety device is still the one between your ears.

I also have to replace my clutch, and that is not a cheap option no matter how I look at it.  It has made me consider what type of rider I am and how I ride.  The good news is that I put a lot of miles on my bike.   If I just commute, which is 90% of my riding right now anyway, I put roughly 1500 miles on the bike a month...or 18K a year.  That's more than some bikes have in a lifetime of riding.  Susan and I made the decision to become a one car family do to our lifestyle, economics and simplicity.  My Burgman became my "car" by default.  I became a year round rider by default.

When I added it all up it just made sense to eventually get the better clutch.  Although it will run me some $400 to $600 after all is said and done.   That is not including labor.

My logic is simple.  I am to poor not to have quality.  My current clutch has roughly 25K on it, I plan on replacing it early next year.  I just hope I can get another 1000 or miles out of it.  A Dr Pully HIT clutch should last me at least 25K and more.  I intend to be on my bike for a while.  This clutch eventually pay for itself.  Sadly I won't be able to do anything about it till the new year. 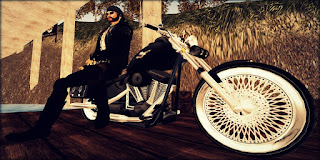 Eventually I would like to get a new bike.   I'm not sure if I'll stick with a scooter or not.  Sue is pushing me to consider a trike and I've heard nothing but good things about the Piaaggio MP3 500.  Or a Can-Am Spyder, although I'm not a big fan of how they look.  Frankly I could see myself with a sidecar of some sort, but frankly all those options are at least three to four years down the road.  Susan and I want to do some touring eventually but due to her balance issues riding 2-Up just does not seem possible right now.

I would like to keep the Burgie if I do get another bike, but we will see at that time where we are in my life. All I know is that I enjoy riding.   I may never tour the county or join a club or even make it to a rally...and you want to know something.   I'm okay with that.

Being a scooter commuter is what I am and to quote my boy Jack Kerouac.  "There was nowhere to go but everywhere, so just keep rolling under the stars."
Posted by The City Mouse in the Country at 3:06 PM

August 8 was my three year anniversary. I, also, am aware of Hurt Report.

The Piaggio MP3 and the Spyder are very different rides. The MP3 rides like a regular bike. The Spyder is like riding an ATV. Sidecar rigs intrigue me, but I have no place to store one. I admit I'm leery of having the responsibility of another person on the bike. If I was going to tour with Heather, I'd want to have either a Spyder or a sidecar.
~k

I have a car port which holds the bike and our car with little problem. I think I could get another bike, even one with a sidecar rig, under it with no problem. That however is a few years down the road. I like the Piaggio MP3 better than the Spyders. There are Goldwings and other trikes as well. Personally, I think I'm a scooter guy.