When you buy a new car, you understand the basics of that car.  What the steering wheel does, where the brakes are.  What you don't know is what to expect.  How will the car react in wet weather?  Around sharp curves?  Up and down hills?

So you take that car out for a test drive and learn these things.  It helps you decide if you want to buy that car or not. 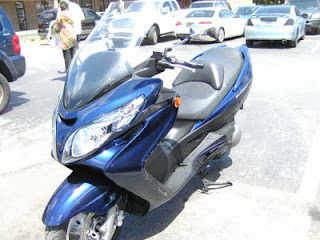 Since I don't have my motorcycle endorsement (yet) I'm not allowed to take the bike off the lot.  I had to make my decision on what to buy based on second and third hand information.  From various friends, websites, forums and magazines.  While my choice to buy a Suzuki Burgman was informed by this information...if I made the right one or not wouldn't be known till I took her out onto the mean streets of Tampa and opened her up.

So this is a first for me in a lot of ways.  Not only is it a new bike, but its also my first ride on something bigger and more powerful than I had ever ridden before.  Not only would I be driving in the stop and go traffic of a city, but traveling on highways and along some twisty country roads.   I had not really planned on this route but it just sort of happened that way.

To say I was a bit nervous is a bit of an understatement.   I could just see myself getting onto the bike, pulling away into traffic and going down in a heap.  I didn't thank God.  I did however learn some things about the Burgi right off the bat.

I had a brief ride through the city of St Petersburg and then had to cross the Gandy bridge.   The speed limit was 65 mph and I quickly got the bike up to speed.  Up until then I was traveling at about 35 - 45 mph.

I had expected some buffeting but was surprised by how much.  I felt like I was getting punched as the wind rolled over the windscreen and straight up into my chest and head.   I'm 6 foot tall and had traveled less than 20 miles.  I already knew I was getting a taller windshield as soon as possible.

Bending over a bit and looking just over or through the windshield helped immensely, but created an awkward position for me.  I read some reviews where the writers complained of a weird magnification of the windshield, which I did not experience at all.

I also noticed how the bigger bike caught the wind a lot more than my smaller previous Zuma 125 did.  Which came as a bit of a surprise and I had to work out how to cut the wind on the bridge.  Luckily traffic was light and although I was not blown into another lane, I felt that I could have easily have been.  The weight and size of the bike would also be an issue on the twisty back country roads I drove on. Where I was used to the much lighter and smaller Yamaha, so it would take a few more days and miles to adjust to the bigger Burgman.

Once I hit the city traffic things got a little easier, although I still had to get used to the weight of the bike.   As my lovely girlfriend pulled into a market I nearly tipped the machine over pulling into a parking space...all because my weight was not placed right much to her amusement!

My little Zuma 125 could easily keep up with city traffic, I felt a bit more visible on the larger Burgman.  Just when I'm feeling a bit more cocky some idiot pulls out and crosses two lanes of traffic right in front of me.   A quick light touch of the brakes slowed me quickly enough to avoid a problem however and I enjoyed the quickness of the stop.  It was not a panic stop but if I were traveling about 10 miles an hour faster it could have been.

One thing I wanted to do was buy a drink holder.  I joked about with the salesman at the dealership, but as I drove nearly 100 miles in temperatures close to 100 degrees I realized that I would really need a way to keep cool.  I was riding in short sleeves and jeans, boots and my helmet.  Not exactly safety gear but with a jack and full helmet I would be melting my fat ass off.

Luckily the front glove box does a deep pocket that will hold a bottle of water, although opening and closing this box while traveling seems a bit dangerous.  I guess I could do that at stop lights.

Under the seat I was able to store a jacket as well as a small toolkit that came with the bike and a odds and ends.  I was slightly surprised to find there were not one, but two, compartments for holding documents on the sides of the storage compartment.


As I approached the first 100 mile mark on my new bike I thought to myself "I made the right choice."   I was a bit concerned about the 400cc engine because I wanted something bigger...afraid that six months from now I would be wanting more power.  After my first 100 miles on all types of roads and traffic conditions I felt the 400cc would be just fine.
Posted by The City Mouse in the Country at 12:31 PM