So which Maxi Scooter is for me?

May 1, 2014 - UPDATE:  A lot of you are looking for information on Scooters.  A few of you may even buy one, so I'm going to recommend you read not only my article but also this piece on Cheapskate Scooters.  You want to buy the bike that's best for you, but also one that is best for your situation.

On the website Ride to Work one of the biggest problems it seems with riding to and from work on a motorbike is storage.  From the simple brown bagged lunch up to laptops, people bitch about the lack of storage on their bikes.

As I decided to move forward with owning a bike, storage was one of the issues I had been looking at.  I was looking for enough storage to do two things.  The first was haul my lunch bag back an forth as well as hold a sweater and jacket for rain and night riding.   The second was a little more complex.

I am planning on letting the bike eventually replace one of the two cars I own.   I own a 2002 Jeep Liberty with 127,000 miles (204,387 km) and a 2003 Hyundai Elentra with about the same.   Like it or not one of these cars were going to the great auto wrecker in the sky sooner or later.   Probably my Elentra since I tend to ride it hard and put her up wet.

So for me, the storage issue was simple.  Scooters can hold a lot under the seat depending on their size and a Maxi Scooter can hold about 3 bags of groceries.  Get a top case or saddlebags and you have even more storage.

So the question now became.   Which scooter was for me?  Even though scooter sales have exploded over the last few years, their is still a bit of a stigma when it comes to the bigger scooters.  I think I know why but that's another blog post for another time.  Today, most scooters being sold are in the 49cc range (good for city driving, triple digit gas mileage and low costs to operate and insure).  My little Yamaha Zuma was the next step up at 125cc.  It got me up to its top speed of  55 mph (89 kmh) with no problem and let my old car sit still for a entire month while I commuted around on the scooter.

I was finding lots of scoots in that range.   Not so much in the range I wanted.  Plus, while there are lots of companies that make scooters in the 125cc range and below...not many companies make the maxi scooter, which is defined as 250cc or above.

So lets start with an icon.  Vespa.
When people think scooters the image they have in their mind is pure Vespa.  The design is classic, mechanically my research showed little wrong with buying one of these.  The displacement was a little below what I wanted (I wanted to be in the 400 - 650cc range) meaning a top speed of only 80 mph (129 kph), not that I was planning on going above 70 mph (I do that in my cars now, it's a comfortable speed for me).  Plus, there are several Vespa dealers in the area that could fix things when they go wrong.

Only two problems.  Searching Craigslist and Ebay I did not find any bikes that met my budget.  Buying new would have been possible, but pushing my budget.  This was about saving money and adopting a new lifestyle.  Putting myself into more debt was not on the list.  The second issue was the displacement.   I wanted something with more power.  I didn't want to be going "I need to sell this bike for something with more power" six months from now.

Now to be honest I fell in love with the next scooter.  The Aprilia Scarabeo 500 ie.

You still have the classic design, the Italian engineering.  It looks a bit more sporty to me that the Vespa.  It's displacement was higher, at 467cc as compared the the Vespa 287cc engine it was going to move!

I've always been an odd duck and nothing I had seen on the street yet showed such a unique look.   There was even a dealer in my area!

And now the issues.  While I was able to find a few used ones, my research showed that if there was a issue it might take weeks, not days, for the part to come in.  Repair bills also tended to be high on this bike.  The cost of a new bike was again going to strain the pocket book.

Kymco scooters had a lot going on for them.   They are generally well respected, pretty easy to get parts for and would run about a grand cheaper than then the other two bikes I was researching.   Kymco has a lot to offer in there Xciting 500Ri class, including a model with ABS brakes.   For someone like me not wanting to kill themselves on a bike...this was a major plus!

The problem.   No dealers within a 100 mile radius of my home in Florida.   While I might find a mechanic the general consensus of all the reviews I read and research I did came to one conclusion.   You get what you pay for.   It might be a good bike, sharp to look at and would meet all my needs.   But it was cheap.  Cheap in the way it was put together and cheap in the way it handled.  I am to poor not to have quality.

I went in search of Honda's Silverwing model, but no luck.   Honda seems to thrown in the towel when it comes to maxi scooters.  No dealerships, nothing on any of the used bike sites.

Yamaha however offered the glorious TMAX.  I have to be honest, until I read about the performance of this scooter I was going to pass it by.  Motorcycle like handling was all I needed to hear.   While I had my reasons for wanting a scooter and not a motorcycle, in the back of my mind the idea was always there.  Here was a chance for me to have both the handling of a "traditional" motorcycle and the convenience of a scooter in one nice package.   I even found a dealer that carried them!

Problem was, even the used TMAX was stretching my dollar thinner than I wanted it to go.  There did not seem to be much of a used TMAX market out there either.

Which lead me to the bike I ended up getting.  I had heard good things about the Suzuki Burgman.  Some had called it the Benz of the Maxi Scooter world, and not in a bad way.   They were affordable used and there seems to be enough of them in the market to make finding one easy.   They had glowing reviews.  The performance was ranked very high.  They kept their value over time. 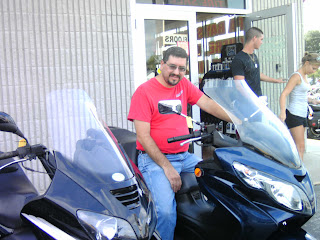 Suzuki dealerships were common.   I can go on.   I had made up my mind early.   It was going to be a Burgman.  I wanted the 650cc displacement but when a 400cc fell from the sky into my lap I had to take advantage of it.

I am picking it up later today.  My first ride on a new machine and I'm nervous, scared and excited.  Happy too.

So lets see where it takes me and what adventures await me.
Posted by The City Mouse in the Country at 2:31 AM

Well, maxi scooter are very unique and many of us likes it very much due to its comfortable ride and also with its performance. As maxi scooter are eco friendly and helps to save nature. Thanks for such a great scooter.

Robert, I just started reading your blog from the beginning. And this is exactly the thoughts my husband was harbouring when finally deciding on his then Burgman 400. Unfortunately we had to sell it when moving back to Germany but he is shopping again ;-)