To be completely honest I don't remember the last time I put a new battery in the bike.  A quick search of my blog stated it was over a year ago.  One would think that I would get more than a year out of a motorcycle battery, and as I placed my $80 dollars for a new battery on the table of my local dealer he told me that this one should last about a year and half.

I bought me a Bike Master AGM Battery.  I probably could have payed less for it on the internet, but I have an event that I wanted to attended on Sunday and frankly I think Sue didn't want to hear me bitch about being off the bike anymore.

It's an easy enough job to replace the battery and after I did so Kimmie fired right up.  I took her around the block of my neighborhood,  being thankful that it was not something more serious like the stator.  I also decided to buy a trickle charger just in case my bike would end up sitting for longer than I would like (it more or less sat for two weeks as I fought off a mild case of the flu).

I still have the old battery and want my mechanic to run a load test on it.  More for my piece of mind than anything else. 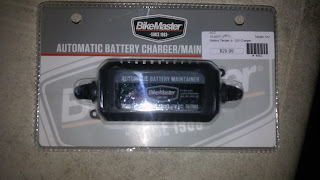 That's not a bad ride and I've been wanting to build up my tolerance for riding anyhow.  So it's all good.  I just hope that life doesn't rear it's ugly head and something comes up, like work.

Plus, getting out of my comfort zone is not a bad thing.  Come December and January I will be putting more effort into working independently, which frankly is not an easy thing for a introvert like me to do.    That's my goal for the year of 2017.  Taking the bike out to Orlando, Jacksonville, Sarasota and other places.  I really have no excuse not to anymore.

Posted by The City Mouse in the Country at 8:24 AM

A year and a half on a battery? Something's wrong there. I typically get 4, 5, or even 6 years.

A year and half doesn't sound right to me either. My Gladius is a 2009 that I bought new from the dealer in 2011. It still has the original battery and fires up every time.