I've been riding for a bit over five years now, and I keep thinking that their is no reason for me not to ride to the other coast or other places.   I've been lost on the bike before and to quote my ex-wife.  "Every road goes somewhere, and once your somewhere you can always find your way home."   Still though, I've grown to depend on the technology and understand it better than most.  I don't care for the idea of being totally without it now. 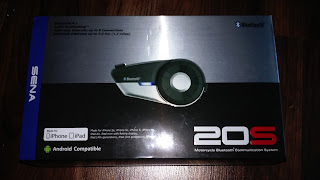 Susan and I stopped over at Cycle Gear with the intent of buying a Bilt modular helmet with the Bluetooth built in.  As it so happened the sizes ran small.  Even the XXL large helmet was to small for my fat head.  They did have a few other helmets, most without Bluetooth, but nothing in the price range we were trying to stay within.

That's when the debate started.  "Do we just buy the unit by itself?"

One of the reasons that I've been wanting a Bluetooth is because of the GPS function.  That has been my primary concern, I just feel I would be more willing to travel to other places if I felt secure in getting there.  I don't really like the idea of using the phone or listening to music on the phone.  However having that voice in my ear telling me I was going the right way appeals to me.

The option to buy a Bluetooth and install it in my current helmet was suggested.  I'm not very happy with the old helmet but the idea of being able to move it to another helmet later was just to good to pass up.  So just like that I became the proud owner of a Sena 20S motorcycle Bluetooth communication system. 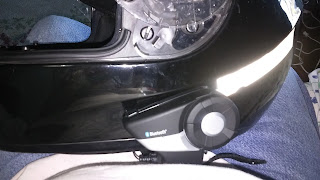 So they installed it.  It cost a bit more than I would have liked, although I did get the two year extended warranty on the unit.  I now have access to the phone, music, FM radio, Pandora and can use either a one-to-one or group intercom (with up to eight people).  It will link up with other Bluetooth systems and there are even voice prompts.   Yes, even a smartphone application.

Susan called me on the Bluetooth on the way home twice.  I was able to hear her clearly with the visor down and traveling about 50 MPH.  It was when I was on the highway and at a much higher speed that I had trouble making out what she was saying. In fact, that was one of the reasons I didn't do this before.  I've read reviews of the Sena headsets that have told me the same thing. 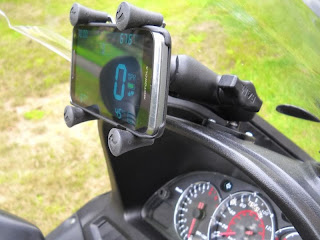 I kept losing GPS on the way home, mostly because my smartphone was in my pants pocket.  I think if I tucked into my jacket or a shirt pocket I would not have an issue with it.  Although now I wonder if a cell phone mount might be in my future (as shown in a picture taken from somewhere).  At least that way I would have GPS and be able to view the route as I approach it.  Although I would have to have a small hole drilled into the dash to have a charging cable added .

About half way home I switched to the music function on my phone and tuned in the Billy Bragg station on Pandora.   Bragg is a singer/songwriter with a strong voice and generally just guitar to accompany him.  I figured he be a good test of the speakers.  Again, I was able to hear clearly as long as I stayed below certain speeds.

Generally speaking I'm happy with the whole setup and will have to play around with the unit some to figure out how to get the most of it.  This may be the only Christmas gift I get this year but I'm happy with it.  I'm looking forward to those days when Sue will behind me and were chatting as we ride.

I'm looking forward to getting out more.

Posted by The City Mouse in the Country at 8:31 PM

Congrats. We have the Senas as well. I only find them difficult to use when trying to pair them together after hubby has paired his with Polar Bear. The re-pairing is the pain. For the most part they've been trouble-free for years.

Rob I love my Sena but I don't have issues with any speed.

There are some keys though. Make sure the little plastic wind shield is clipped onto the mic on the side opposite your face. Also make sure the foam wind sock is installed.

Finally, and this is completely counter intuitive, try wearing earplugs. Adjust the volume so you can hear the Sena. Then tell me what you think.