As much as I hate to admit it, I've always took issue with the Can-Am.  It's not exactly a motorcycle and people have told me they steer like sleds or lawnmowers.  The price has always been a little daunting and the size made me question if I would be able to handle one. 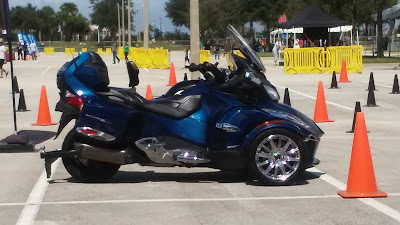 I can honestly say that starting today, they are on the list to replace Kimmie.  The ride was smooth, and although I had a little issue with low speed turns, in that I kept wanting to counter steer or lean when I could not - that would be corrected with time, I was impressed.   The bike is semi-automatic meaning it has a thumb shift to climb gears but the computer handles downshifting.  It took me about five minutes to get used to shifting that way but once I did it was seamless.  The bike had solid, but not stellar, acceleration and handled very well.  A few rough patches on the roads around the Convention center were handled without issue by the bike I rode.

Susan was also able to get on and off without much issue and that was another plus in the bikes corner.

I could have rode Kymco scooters, a few off road vehicles, the Beamers, the Suzuki's and others.  However we were alternatives to ride the Can-Am and waited over an hour in the hot Florida sun to do that.  Each demo ride out lasted anywhere from 30 to 45 minutes.  Some dealers required you to supply your full gear (helmet, jacket, boots at minimum) where others were OK with you in long pants and a helmet (Can-am supplied Nolan helmets in various sizes for examples). 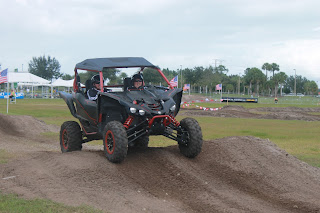 Inside the convention hall was a variety of dealers.  Most of which frankly didn't interest me.  I don't go off road riding, I'm not really that interested in the mechanical side of things.  Yes, I want the best performance out of my bike for the longest time possible...but I've not desire to go to your booth unless you have some nice swag.  So that left me looking at bikes and oh what a selection there were!

I showed Susan the Honda NCX 700 that is on the short list of "new bikes" when its time to buy a replacement.  I ended up have to defend a Suzuki Burgman 650 from a few people that were putting it down, but the woman there kept looking at it wistfully and I think I convinced her it was a good touring bike.."A lounge chair on wheels" is how I described it. 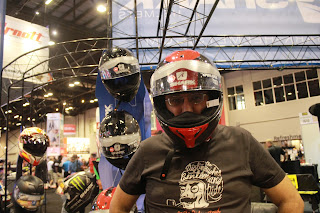 Vespa and Piaggio was both represented well and truthfully I didn't spend much time looking at their products.  While I love scooters I'm probably moving away from them and going towards a semi-automatic or fully automatic motorcycle.

I did however want to look at helmets and fell in love with a new Shark helmet.  It will not be able till March of next year in the US and will probably sell for $700 dollars.   However it was amazing, a full sun shield at a touch of a button, good venting and most amazing to me...I put it on and the ambient noise around me was reduced to zero.  I mean, nothing.  I could still hear, still focus on what was around but it was a several decimals lower than before.

For a cheap bastard like me to want one right then and there, and probably would have paid full price, told me I was going to take a closer look at Shark in the future.  Somehow I missed the Bell Helmet display even though I wanted to stop in.

Overall I enjoyed myself and would love to go a second day.  Just to ride some of the bikes I am considering in the future.  To compare the smaller Kymco's to my beloved Kimmie (Kymco is discontinuing anything bigger than a 400 in the US for 2017).  To ride the BMW's and others that were there.

To take in some of the lesser know companies and display's.  To just look. 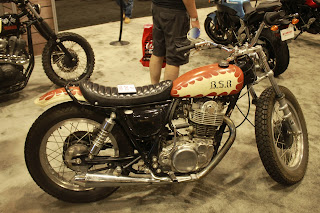 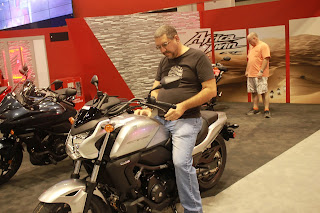 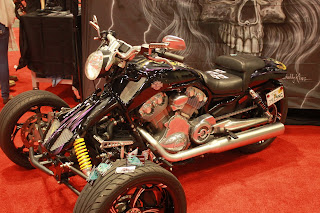 I've posted additional photo's to the Scooter Revolution Facebook page.
Posted by The City Mouse in the Country at 9:57 PM

Cool, it looks like you two had a great tie at the show.

I am glad you like the Can Am and that Susan could mount and dismount easily. They remind me of snowmobiles, but at the same time we've ridden behind one coming off a ferry before, and that sucker took off like a shot. He was railing that thing like a sport bike so i am sure it is just a matter of getting used to the different handling.

There are a few places in Washington and Oregon where you can take 3-wheeled classes where they teach you the different handling techniques. I wonder if there is anything like that in your area.