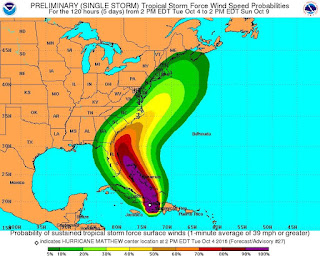 He skirted up the coast line on the Eastern side of Florida and caused no damage in the center and western parts of the state where I live.  It was however a bit scary to be that close to a "loaded gun."  We had a few overcast and rainy days, but the damage on our side was nominal.

The damage caused by him in North Carolina will run into the billions and it would not have taken much for him to have shifted just a bit  to the left and run rampant over Florida.  Well the hurricane season is not officially over (that's on November 1) it seems that is the last big storm of the season.  It's been an interesting year, and it's driven home the fact that it's only a matter of time before the "big one" hits us.

Lately I've seen to have been dying from 1001 small financial cuts.  It's nothing to be concerned about in the long run, as we have small family issues and friends coming into town.  Which means eating out, drinks, rides to the beach and everything else.

One such little need was the gas gauge on Kimmy.  I pulled in for gas the way I normally do, filling the tank to the brim and knowing that I would have at least 156 miles till my next fill up.  Generally I get gas around the 150 mark, no need to push the bike further than she needs to go.

I must have traveled a few miles before I realized the gauge was stuck at 1/8 of a tank.

This is not something that needs fixed right away and I'm pretty good at remembering to reset my tripometer. Kimmy is getting older and although she runs well, I was reminded that eventually she's going to start nickle and dime'ing me to death.

I've discussed getting a newer model bike in the past and what I would like to buy.  However I'm not their financially yet and probably am about two years away from any new toys. 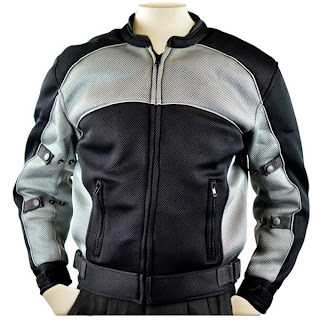 Things like a new helmet and jacket however can not be put off for to long.  I'm "expanding" in all the wrong places and will need a new jacket soon.  My mesh jacket recently lost it's shoulder pad, as it came apart in three places.  It's an easy fix, just order a new shoulder pad, but again I have two jackets.  Why not buy one very good three or four season jacket and be done with it?

The same thing applies to my helmet.  I would like to have one with access to a Bluetooth phone and GPS.  It's not necessary at this time, it's not needed at this time...but I want to plan for the future.  The helmet I buy today will last me for at least five years.  I am not the same rider I was five years ago, I doubt I'll be the same rider I am five years from now.  Why not prepare for it.

It is for these reasons that I am planning to go to the Aime Expo this coming weekend.

Which brings me to part three.

3) Time may change me, but I can't trace time

For the past 10 years or so I've run my own so successful part time business.   It started because I needed a job and the only one I could find was delivering papers.  I hated it but it helped pay the bills, then I realized that I could also deliver a few magazines in addition to the papers that were on my route.  So I picked that up. 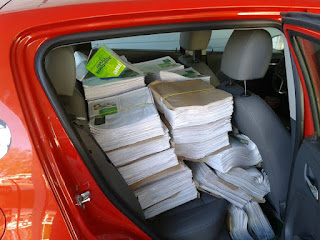 Then we started with a weekly paper.  It grew, slowly at first.  At one time it was bringing me in another $15000 a year on top of my "regular job."  It wasn't hard, I would say approximately 16 to 20 hours extra a week in a car spread over 3 days.

It was the mileage that was the killer but thanks to a very weird American tax code,  I was making money even though it appeared I was losing money.  Frankly that's how Trump can report a huge loss of income but still be making millions.  In addition I could put my "losses" in to Roth IRA's and other tax advantage plans and make additional income.  I can't support the man but I understand how he's successful while still reporting losses.

Like everything however the business environment changes.  I was at a point last year where I lost money.  This year looks to be less of a loss but it still hurts the bottom line of the company.

Sue and I have discussed different options in the past.  From rentals to restaurants and each time we seem to hit a roadblock not of our making.  We have been outbid, we've had a scary illness scare, we were unable to get the loan because the property was leased, etc.

It's been a long time for me to get to this point but I've decided to open my own office.  I'm starting small, part time and with "simple: stuff - I'm still not ready to leave my full time job, but it's time.  I'm licensed in all states, I've been bonded, licensed and insured.

It's the project that has taken up most of my time these last two or three weeks and kept me off of Kimmie.

Posted by The City Mouse in the Country at 8:01 AM

You have been busy.

Congratulation on deciding to open your own office. Hopefully you will be busy enough to transition to part time where you are now, and then gradually work over to full time with your own business.