There is an old saying about you never get second  chance to make a first impression.  In some ways the Kymco has impressed me.  For example I like the sporty look of the scooter, it feels more like a sport bike in some ways.  Whereas my old Burgman felt like a Cruiser, or to quote some wit:  "A barcalounger on wheels

I like the clicking noise the turn signals make because I'm horrible at remembering to turn them off.  The little cricket buzzing in my ear is a nice reminder to do so.   I also like the corning in the Kymco, it seems to take a curve at a better angle then the Burgie ever did.  Of course, I might have just gotten better at cornering.

Two things really surprised me, one was the windshield.  While certainly on the replacement list, it seems to direct the air up and over me much better than the stock Burgie shield ever did and there is a definite reduction in buffeting because of it.  At higher speeds the Burgie's stock windshield seemed to "quake" a little.  No such issue with the Xciting's windscreen.

One of the other things that surprised me is how well it handles cross winds.  Maybe I've gotten better at driving in them, but the Xciting seems to cut through a cross wind easily.  I remember having to feel like I was practically leaning on one side of the Burgie to keep it upright one day during some punishing Easterly winds.  While I've not had the experience of taking the Xciting out during a day like that, I've been impressed with it's ability to handle the winds so far.


The convenience of the fuel tank is nice as well.  I an pop the lid open, fill up the tank, replace the nozzle and put my wallet away all without having to dismount the bike.  The only issue I have with it is the very small tank, it only takes a little over 2 gallons to fill it completely.  Frankly I've not down the MPG calculations yet but a rough guess puts my MPG around 65?  Certainly not a shabby number.

Finally the seat is very comfortable, surprisingly so.  No matter what I did, including adding a beaded seat, to the Burgie I suffered from the dreaded "Monkey Butt."  Some days were better than others of course, but the seat on the Kymco is firmer I guess?  So far all I have done is commute on the bike, so this impression might change but for now I've no complaints. 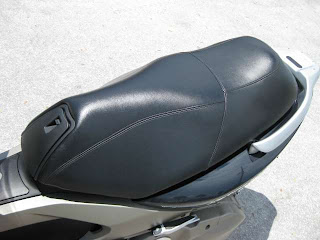 I can't help but wonder if the performance I've experienced out of this bike is because I'm used to the much larger Burgman, where the Xciting seems "heavier" is some respects it's also a much more compact scooter.  The storage is horrid, I have room for a full face helmet and gloves under the seat and not much else.  Where in the Burgman I was unable to place my full face helmet, my jacket, gloves and a sweater under the seat when I was work.

Another positive is there is a hook to attach a grocery bag to in the pass through.  A thermos on a carabiner might work as well on those hot days.

Unless something changes drastically in the next year or two I think I'll be on the Kymco for at least three years.  Lots of time to let it grow on me I suppose.  Plenty of time to...oh go ahead and sing it you two:

Posted by The City Mouse in the Country at 2:09 AM

I am glad you are enjoying the Kymco.

I don't think I've heard any bad things about them, just good.

Rob, very happy to hear you're having a good experience.

I borrowed a Kymco (Frost, I think) last spring, and suffered the monkey butt on that bike. Just looking at the saddle on the Exciting I can see that it ought to be comfortable.

Silent turn indicators is a peeve, I agree. The Kymco I had also had the tic-toc thing going on and it was enough to ensure that I didn't ride on and on with the blinking blinker blinking. I added a piezo beeper to my LX 150 and it sounds like a delivery truck in reverse. It's great in the city though because I gives pedestrians a heads up at intersections.

Looking forward to following your adventures, as always.

I am glad your Kymco is growing on you and you are finding good things about it. It always take a little time to grow to love a new bike. I have heard nothing but good things about Kymco's, I almost bought one myself, but then went in a different direction. Are you going to add a topbox? That would certainly give you way more storage. Happy riding!

Nothing like the love of (hu)man with bike, IMO!

Glad you are enjoying your baby!

I am looking at a few Kymcos myself for this summer addition.

I rode a Kymco once, when vacationing on the Greek Island, and I was impressed by the power back then. In the 90s it was the biggest scooter you could get in Europe. Today, we have so much more choices. The Kymco would certainly work for me but Hubby tried it, and couldn't find a comfy position for his legs. So that one was a no-go.
I am glad you are satisfied with your purchase.