The threat of Hurricane Matthew may, or may not, keep me off the bike for a few days as well.  Even though it appears that I am on the "dry" side and far enough to the west that damage in my area will, hopefully, be minimal.  The last one that came through the area caused minimum damage.  It's not scheduled to make landfall to Thursday in the early morning...but it should be interesting to say the least.  I'm hoping this one, which will hit the shore as a Category 4, will stay far enough east to not be a problem for me.

I've spent most of the last two weeks or so changing departments at work, gearing up for our busiest time of the year...all the while considering an offer to supplement my income with an independent option on the side.   I was going to turn it down, but retirement is coming quicker than I would like and the possibility of building my 401K's and annuities is tempting.

I've spent much of the past month working towards goals: at work and raising what funds I could for the Distinguished Gentleman's ride.  Tampa raised about $21,500 for the cause and had approx. 150 riders in the event itself.

I have ridden to work where I could, I have rode here and there when and where I could.  The boring non-exciting day to day stuff that fills in most of our lives.   Now suddenly it's October and once again I'm faced with change, some of it is my own making.  Some of it has, like a inevitable change of seasons, been forced upon me. 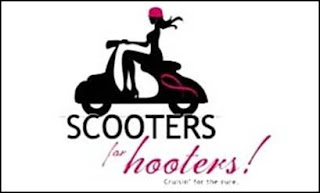 It will be a busy month, as I attempt to once again take part in the Scooters for Hooters event.  This is an event I've been trying to attend for the last three years it seems, only to have something prevent me from attending.  I'm not fundraising for this, I'm intending to just pay my riding fee of $30 and riding with Kimmie covered in pink to support those that have had, or are currently fighting breast cancer.

Later on in the month Tim Zbell, a old friend and drinking partner - and former amateur motorcycle racer, will be in town for wine, woman, song and the AIMExpo 2016.  This is another event that I've been wanting to attend for the past several years, but have been unable to for a variety of reasons.  This is the last year it will be in Orlando, as the 2017 show will be in Columbus, Ohio.    I am in need of not only a new helmet, but possibly a new jacket as well, and I can think of no better place then the AIME to pick up one or the other.

Posted by The City Mouse in the Country at 8:44 AM

You have been busy. As my grandmother would say "It'll keep you out of the saloons."

I am jealous you get to attend the AIMExpo again. Looking forward to seeing pics though.