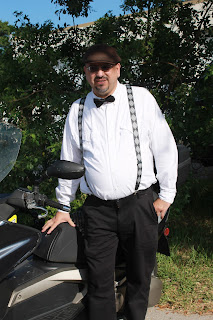 Over $20 thousand dollars raised for a good and worthy charity.

Over 170 miles (including the ride itself, getting to the ride and making my way home) ridden through some of the prettiest country in all of America.  It's easy to forget that I live in paradise at times, and I took a moment or two to glance over my shoulder at some of the calmest and bluest water in the world just to remind myself of that fact.

It was worth riding in 90+ degree (32.2 C) heat just to see the smiling faces and bemused looks of wonders of pedestrians and cagers alike.  More than a few filmed us going by, in our dresses and suits.  Sometimes I just needed to look ahead and see nothing by bikes.  Sometimes I needed to glance in the mirror and smile at all the bikes that were behind me.  Bikes of all shapes, sizes and color.  BUT only one scooter and it's happy though very hot rider.

Kimmie held her own against various Trimuph's, Harleys, Ural's Honda's, Moto Guzi's and at least three or four Royal Endfields, Vincent's and even a Norton.  Let's not forget the BMW's, Suzuki's and an odd Kawasaki's or two.  Both new and classic bikes were represented. 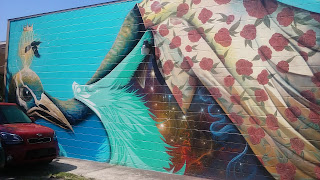 The ride itself wove its way through downtown St Petersburg, where more than one person pulled out a camera and filmed us going by.  We zipped through this town and again I feel the need to spend the day just looking for, and taking photo's of the various murals.  I actually was able to take more than a few photo's of nearby murals as we stopped en mass at Green Bench Brewing for a hour long beer and food stop.  I have to be honest, I'm not sure what beer I had but it was quenching!

We worked our way down the city and across the Gandy Bridge, where people enjoying a day out on the sand waved and pointed.  Then up and on to the bridge itself, the dark blue water looking so refreshing well a light ocean breeze cooled us down.

Into Tampa proper now, around the bend and onto Bayshore Blvd.  This is one of my favorite rides in the city as we cruise along the Bay moving effortlessly towards the city, then into the downtown itself were a cute little girl of no more than two or three bounced up and down and waved by closing her fingers as only little kids do.  More than one biker waved back to her, which only made her more excited to see us go by.

Onto the highway now, opening Kimmie up a bit to stretch her legs as we head towards Ybor City and the last stop, Coppertail Brewing.  Although I did make a brief stop after the ride at my favorite watering hole, Cigar City Cider and Mead since I told them I would.

This ride was a first in a lot of ways for me.  It's also the biggest group of riders I've ever had the pleasure to ride with.  It was my first charity run, and I raised just about 625 dollars for fighting prostate cancer.  Thank you all who donated.  I am rather proud that I finished in the top 10 fundraisers  If you have yet, and would still like to give something you can donate here.  Just be sure to do so before October 3rd.  That's the last day donations can be accepted and it is tax free.

Sadly a friend of mine that was going to ride with us had last minute bike problems and was unable to make it, meaning that I don't have any Go-Pro footage to share.   However at times we had a jeep with what I assume was a professional photographer following us, and even a drone above us at time.  Once I have access to that footage, I'll be sure to share.  I'll also share more on my Facebook page. 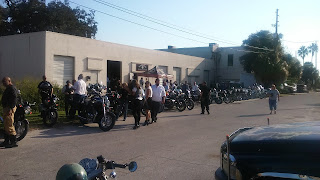 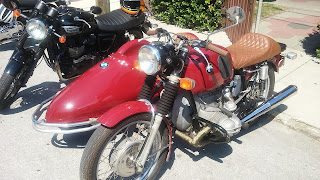 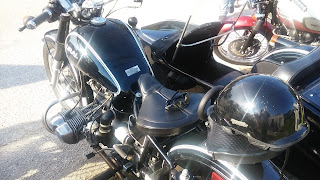 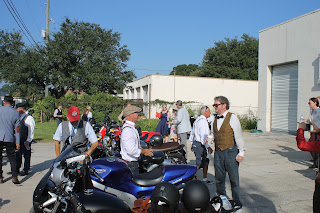 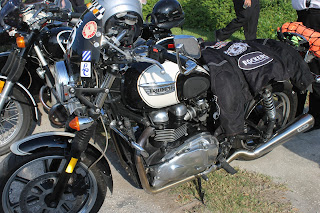 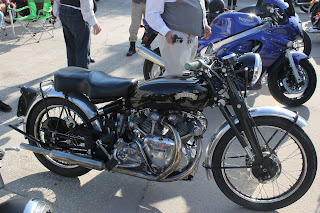 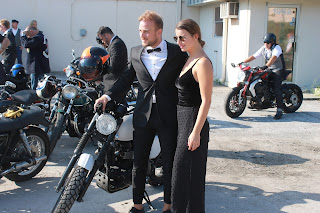 Posted by The City Mouse in the Country at 8:30 PM

Looks like a great time Robert! Too much rain over on this coast for much riding unfortunately.

Looking very distinguished of your ride!

That is a lot of bikes participating, good for you for representing scooters.

Looking prefty dapper too, I have to say. What an experience, looks like you and I had similarly great times.