Well it seemed like a good idea at the time...when the bike is the only means of transport

This blog post was started when I realized that I was really hot during the summer.  "Would not a nice fruit smoothie be nice to cool down with" I thought to myself.  "Yes, yes it would be." I said.   So I needed a few things.  I could keep the ice under my seat.  That could help keep me cool, and I could stash the fruit there too! 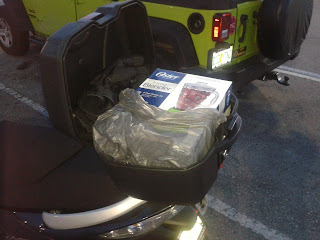 I thought to myself that the blender could easily fit in the top case.  So I run up to the store, buying the groceries and milk and a few other things all of which stored nicely under the seat.  Kimmie has a cell phone charger under the seat as well, it would not hard to plug the blender to it, I just have to modify the blender cord some!  There was only one slight problem. 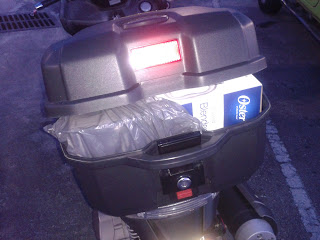 Yep, I could not close the top case all the way.   So much for the idea of ice cold smoothies when out in the middle of an adventure on a hot Florida day...at least until I get a bigger top case.

When I decided that my scooter was going to be main source of transportation we owned a car and a jeep.  So I always had a back up plan in case of bad weather or if I need to pick something up.  Eventually we ended up trading both vehicles in to buy a new car, meaning that my bike literally became my only means of going from point A to point B in most cases.

This has worked out extremely well.  There have been a few times I've need to borrow my parents car but for the most part using a motorcycle as my main ride has not been a problem.  Riding the few miles home from the store with the top case open wasn't a issue.  It generally has served me well running back and forth to the store for odds and ends.  I do have to consider what I'm buying however, as space is limited.

The more I ride my bike however the more I realize I would not give it up now.  It's become part and parcel of "who I am."  That's not a bad thing.
Posted by The City Mouse in the Country at 8:17 AM

I love this. What a great idea. Surely you can modify something to get the job done. I would love to see a photo of you making a smoothie on your scooter. You might even get a side business started if you are not careful!

No, he tired to make smoothies at home and the old blender caught on fire..so want a smoothie go buy a new one...and this time i will make it..his gf susie

We're in the same position right now, trying to decide whether to trade 2 vehicles in on a new one and use the bike as my primary mode of travel. Wouldn't be a problem in the summer, but the winter? Not so sure how that would work out. But keeping everything cold for smoothies wouldn't be a problem. :)

Living in Florida like I do, Canajun, does allow for a longer season. I don't understand how some can ride in the snow and ice. Or when the temp drops down to the negative C's either.

I suppose it's all about dressing right and prepping correctly. Still though...better men (and women) than I to even attempt it.

Smoothies on the road, I think you might be on to something.

We often make Costco runs on the bike but it helps to have side cases with the top case. It just takes some planning ahead and keeping some Rok straps in there just in case.

Is your oster smoothie maker big? If it is trade it in for a magic bullet. They come with smoothie mugs with sealable lids so then you could preload the fruit inside the smoothie cup and put it under your seat with the ice and then carry the motor base part in the top case and it is really not any bigger than a beer mug.

As for the riding in colder temps, I am a year rounder and we get tons of rain and colder temps, but when it gets icy I hop the bus. You are right it is all about the gear you wear, I am actually warmer in my gear on my bike than in my car with the heater on during the winter.

Saddle bags might round out some more space for you on your grocery runs!

I am "scooter only" right now too. It does lend to some innovative thinking such as yours. Good idea!

I am not as ambitious as you re the smoothies. Or maybe I am more lazy! That's it! I just scoot into a Speed Way and get a Slush Puppy...

Riding in the winter is all about the wind protection and the gear. I have ridden five winters in a row now. I sold my car in 2009 and haven't looked back. Motorcycles can be primary transportation with a little thinking.