Due to circumstances beyond my control the Green Swamp ride has been postponed.  Life has a tendency to throw me curve balls.


This was curve ball # 1 - Unexpected surprise

Ever since I have moved to Florida I've had a stuffy head, watery eyes or some sort of issue.  I've never been "officially allergic" to anything in my life but since moving here some 3 years ago I've been even more miserable than I normally am.  Suddenly a doctor's appointment opened up a week earlier than expected.  I took that appointment, even though it would force the ride back into the hottest part of the day.  Whatever he gave me  however made me as dizzy as hell.  So no riding.

My other ride is a Hyundai Elantra, which I've named "Ebony" due to her black color.   She's been a good car to me since I picked her up used back in 2004 or 05.  She only had some 10K on her at the time.   In the following years I've managed to put some 147K on her.  I've replaced the transmission twice (who ever owned her before me tore up the standard transmission the first time).   I was responsible for the second time.

This past Wednesday she died on me.  The starter would not turn over.  In addition she needed two front end CV joints, new brakes and possible rotors...and an oil change.  Since I was in the middle of the route I run two days a week and stuck in the middle of Tampa.  I had no choice but to get the starter done and little choice on the price I had to pay, so $300 dollars later my car was back on the road.  To the best of my knowledge that was the original starter so I could not really complain.

The CV joints I knew about and had to get those done soon.  That came as as no surprise.  The oil change was no surprise.  The brakes and rotors were a surprise as there was no indication they were going bad.  Well none of the work has to be done today, since it is my day off I thought I should work on this problem.

I've considered selling one or both of our cars (she drove a 2003 Jeep Liberty) in the past and on the way home from the doctor my lovely girlfriend said "Hey, lets stop at this dealer.  Just to look." 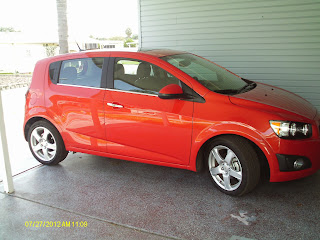 Sue and I are now a one car family (having traded in her jeep as well).  In the back of my head it always made sense.  She does not work (due to a medical issue) and I work from 4 PM EST to 1 AM EST and normally ride the Burgman back and forth to work.  We have no kids, no one to shuffle about.  The stores are close by and the nice thing about the Burgman is it's large storage area.

My Elantra managed to be about 30 miles per gallon of gas combined highway and city.  Her jeep about half of that.  My Burgman gets twice as many miles per gallon as the Elantra.   This new car is expected to get about 35 mpg/combined.  We are saying money on gas, and insurance (1 vs 2 cars to cover) but now have a car payment.  Something we didn't have before.  The jury is still out on if the savings will be worth the car payment.

This does however mean that I will have to ride my Burgie more, sometimes in conditions that I don't currently ride in.  For example, rain.  I will be, for all practical purposes, a 1% now.  Am I up to that task?  I expected to eventually go that route, having only one car...I was not expecting it to be today. Well, at least I got a lot more room to park the bike now. 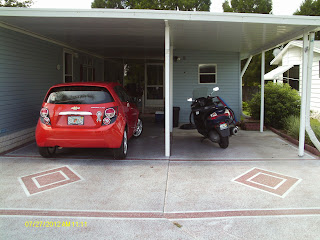 Posted by The City Mouse in the Country at 11:57 AM

Hey! Good for you! All positive things. Love your Great Pumpkin, too!

Don't sweat riding in the rain, just get good gear & it's not so bad. I commute every day rain or shine. Just take it a little slower. Like your new car. We are a 1 car family & the only day I take the cage is on Friday when I am hauling my daughter & her friends around. Hope the allergy thing settles.

As the expression goes: life is what happens when you're making other plans. I'm very familiar with curve balls (see my recent post) and have long ago come to terms with the fact they are an integral part of life - and often end up with very positive outcomes, like a new Great Pumpkin in the driveway.

The burgman looks like the model of ease as far as single-car lifestyle goes. Fortunately you're in Florida, which makes life a whole lot nicer for your lifestyle choices. You know I'm a big fan of gear , so I doubt you'll be surprised at this - go find some real nice rain gear. Riding in the rain isn't really that bad when you're ready. It kind of sucks... but it's really manageable when you're not actually getting wet. Plus, it'll probably still be warm rain, which can't be all too bad.

Robert... Canajun and Brady are right. It's all anout the gear. I had missed your post on Gary's passing. Very tragic. When you get to the Green Swamp ride, that will add a dimension to make it unforgettable.