Christmas comes early. A review of the Freeze Out jacket and gloves - part 1 of two thing

Do not let anyone tell you that Florida does not get cold.

While its true that we don't suffer from sub zero temperatures, or snow and ice for days and weeks on end.  It is a different type of cold.  Our high humidity and often windy conditions make it feel colder than it actually is and that is one of the reasons why hypothermia deaths are so high in Florida.

Despite being born in Pennsylvania I've never grown to like winter or the cold.  While I often joke about it, the truth of the matter is that I always knew I would go south.  The first chance I got after college away I went, and I have never looked back.

While I am no longer commuting back and forth at 1 to 2 AM in the middle of the night, I still have to commute in the dark and at night particularly this time of year.  I am also commuting further and in different types of traffic than I have before.  This is more of a "stop and go" traffic pattern followed by rural stretches at a higher speed.  When I was traveling home in the middle of the night, if I got cold I could easily pull over and add another layer (often I would pull a pair of sweat pants on to keep the legs warm).  Now, sadly, this may not be possible and or dangerous for me to do. 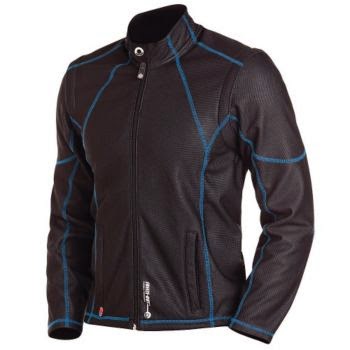 With that in mind Susan bought me three early Christmas presents.  We traveled down to the brick and motor Cycle Gear warehouse (which I admit I forgot was even in Tampa) and she bought me the Freeze Out jacket and gloves.  Of course the temperatures, which had been in the low 40's (5 to 7 C) during the day jumped into the mid 70's (mid 20's C) the second I bought the jacket and gloves.

So, here was the test.  I would wear my normal "summer mesh" jacket to work during the day and wear the Freeze Out jacket home.  The gloves were designed to go under my Fox riding gloves.  The lows for the coming week were predicted to be in the mid 50's (about 12 C), while this would not be much of a test it would at least give me an idea of how the new gear would feel when then temperature dropped even more in January and February.  Of course the temps this whole week were higher than that.

So much for that idea.

Based on what I read from various forums the gear kept most of the riders warm into the high 30's without much issue.  I was looking for two things.  One:  Would I be chilled when I got home.  While the temperatures involved where not "cold", they were cool.  Would I arrive home feeling like I did not leave the office at all.  Two:  How comfortable would the gear be?  I was particularly interested in how the gloves would feel, as I don't like wearing gloves at all, but know what my hands needed protection.

I guess these things would have to wait.

The other gift she bought me however was put to use immediately  She bought me a Bilt bike cover as well.  While the bike sits at home it is actually pretty well protected from the elements.  However when I am at work it's not.  This may come in handy when I'm parked there, however so far I've not taken it to work.  For now I believe I'll just continue to  use it at home.
Posted by The City Mouse in the Country at 9:29 AM

Cold weather gear has been on my wish list for so long it's collected cobwebs. Now I'm considering an electric jacket liner for next spring. However I do expect I'll be in the same position next year at this time. :(

Cool, or should I saw warm... And temps in the 40's is chilly for riding, no matter what State you are in.

I will be interested to see if the Freeze Out works for you. We have a few Cycle Gear stores around here and visit them often. We each have Freeze Out glove liners and a few friends have the Freeze Out under shirts and balaclavas.

My hands are always so cold the glove liners don't do much but our friends love their Freeze Out gear.