Happy Holidays and an update....

First Off....Happy Holiday's from the Wilson household.  We wish you and yours a safe and happy New Year 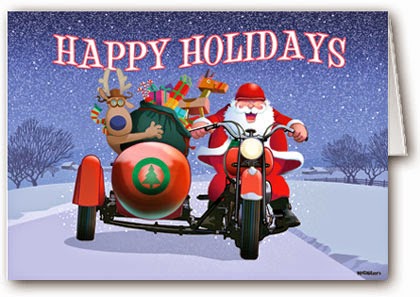 Now on with this weeks exciting adventure:

I thought Kimmie was dead.  She had been sitting for two weeks or so, absolutely not turning over until I had to move some boxes into the nearby shed, so I had to move the bike.  Guess who turned over.

I took her out Saturday afternoon, it was a beautiful day in the low 70's (20's C), and she run fine.  The only issue I had is a persistent hacking cough which I was afraid I would aggravate if I rode to long, to far.  So I put a little under 50 miles on her and called it a day.  Sunday it rained all day, so I didn't do any riding at all.

The new battery arrived late Saturday afternoon but due to other commitments it seemed unlikely that I would be able to install it till after the Christmas holiday. Not that I expected to get that much riding in between now and the end of the year.  Partially due to weather, for example we were expecting a 90% chance of rain as I sit and type this.  Partially due to whatever illness I had still lingered in my system.

Still though I was looking forward to getting the battery installed and moving down the road.  2014 generally speaking was a long and hard year for me.  The new battery, a new heart for Kimmie represented new opportunity...and a new mechanical skill to put under my proverbial tool belt.  The next job will most likely be the CVT belt.

I did decide however to try and ride her as much as I could between now and the new year.  I'm not sure how many miles I put on her in 2014, all I do know is that they were not enough.  I will never understand how someone can let a bike sit, and this year it seemed that Kimmie did a lot of sitting.

I am afraid to check out how little miles I put on Max this year. Sad really. It was kind of a lost riding year for us, but we strive to put more miles on next year.

Merry Christmas to you and your family.

Merry Christmas, Robert, and wishes for a wonderful New Year!

Happy Holidays! Glad to hear Kimmie is motoing along again. I wish you many miles in 2015!

One of the reasons I moved to Florida was to enjoy year round riding. That is indeed possible in my new home state, but I find that life just gets in the way. I find that I avoid populated areas like the plague, as there are so many drivers oblivious to those of us on two wheels.

I usually try to get out where there is less traffic, more things to see, and where the "zen" of a bike can work its magic on my soul.

For me, that often means the middle part of Florida, broadly between Hernando County and the Atlantic. Lately I have taken to a nice ride up near the Villages to a new Winery that I have found. It is a Blueberry wine winery and I was a bit off put at first. Blueberries just do not seem like a good match for wine.

Was I ever wrong! Delicious. I wount take up more space here, but you can check out Whispering Oaks Winery at their website (www.winesofflorida.com) if you are interested.

I love the ride and the destination! ANother favorite is to head over to Daytona, and then go north to St Augustine, with Ocean visible on my right side for over 30 miles!

Hope you have a great New Year! WIll be following you!

The Symba will soon have a new heart as well. Also, a new rear tire and a spray down with stuff to protect her from the gunk they put on the streets to melt the ice and snow. All this will happen just in time for sleet. Oh well.

I did get my Kymco out on the road yesterday. It is a joy and really hasn't given me any big problems. And even though I've put well over 8,000 miles on her for some reason I just don't trust her like I do the Symba. At least not in cold weather when I have to leave her set outside for 9hours.

I hope you do get to ride more in the upcoming year. I, too, would have that as a goal.