Battle lines - the power of the negative.

**UPDATE**  I recently learned that the manager I was dealing with previously at this company had been arrested.  His crime?  Altering VIN numbers on vehicles.  While this happened in 2007 it makes me wonder why he would be hired by a "reputable" dealer with that history.  As well as having access to credit information?  Just another nail in the coffin as far as I'm concerned.  01/05/2014**

I have nothing to say about riding these last few days.  I've commuted back and forth to work a few times, I rode out to a old cemetery and had to take the scooter off road a bit to get the photo I wanted.  I have a small problem with my oil pan - I had the oil changed recently and it appears the drain plug nut somehow got stripped.  I tightened the nut myself but the leak continues. 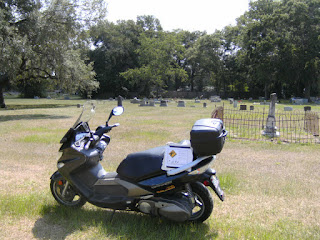 All of these things are minor.   The biggest issue, the biggest problem I would have would be with West Coast Powersports, where I bought Kimmie.  My lovely girlfriend insisted that I buy the extended warranty on her.  I have to be honest, I thought it was, and still is, a waste of money.  However the previous dealership that sold me the Burgie did so knowing that the variator was bad, that it would of ran me about a grand to fix.

Because of this experience, and another bad experience we had in Florida buying a used jeep, we decided to get the warranty.  I've nearly tripled the miles that were originally on Kimmie without issue.  She actually seems to enjoy the ride as much as I do.

My issue with West Coast Powersports is this.  The company failed to process the extended warranty correctly, despite other payments going through correctly on my debit card (helmet, etc). The company failed to contact me for over 3 months in this regard. The bill, I was told by West Coast at the time, would go to collections. My bank has no record of them even attempting to collect these funds till the middle of May.

Andy, the general manager, failed to listen to me in this regard repeating that they had numerous failures trying to collect. He later admitted that the company did not have the correct authorization information. After I requested that he take one payment out and that I would pay off the balance with a money order within the week. He took two payments resulting in my account being frozen (My bank knows my history and personality. They assumed there was a problem when 2 payments came in a combined total of over $350 and froze the account as a  fraud protection measure). He then refused to release the hold. My girlfriend, whose name also appears on the account, called him only to be insulted by him.

Not only is this extremely unprofessional but very upsetting to me. I have had nothing but warm fuzzy feelings for that dealership till this moment. I own my business and have been in the process of repairing my credit. If a payment due to me is not received in 30 days, I'm on the phone figuring out what went on. Now I will admit I was not keeping a close eye on my personal account as I do my business accounts, otherwise I would have realized there was an issue.

Jeff, the general manager, did finally contact me after I used the only tools that are available to the consumer.  I reported him to groups like ripoffreports.com, the better business bureau, comments on the various motorcycle and scooter forums I belong to.  Frankly I hate to turn negative.  I hated to do this.  But the consumer has very few weapons available to him any more.

Jeff did state, and I intend to request this be notarized on official company letterhead to protect myself, that the bill in question would not be sent to collections.  On my end I plan to plan to pay it in full within the next few days.  I still have not received a copy of the warranty as well.

After my dealings with Florida dealerships - only Jim Brown Chevy, where we have bought the Great Pumpkin, deserves praise - I am weary of any dealership now.  I don't believe I will be doing any business in the future with West Coast powersports.  Unless I have something under warranty that is.

This issue appears to be resolved now.  I'm still not completely satisfied sadly.  I'm not sure if I could be at this stage of the game.
Posted by The City Mouse in the Country at 8:49 AM

It sounds like you have done the only course left to you by reporting it and your experience. Hopefully this blog post will come up on google search too when someone s looking up that dealership.

We had a power sports dealer in Salem and Eugene that had dealings like that - they are closed now. Karma will bite them in the butt, it is just too bad you had to go through the annoyance and inconvenience of it all.

Terrible situations. It seems to me someone at the dealership dropped the ball big time. Hope this all gets rectified and that should you need to deal with them in the future that it will be under good circumstances and good faith on their part.

That's too bad. It seems most of the time you buy two or four wheels you encounter some of the biggest jerks on the planet. When the only saleswoman left the place where I bought my scooter it was all downhill for me. I was treated poorly by all the young studs (I know- "Who let Mom in the store?") and never went back after a year.

I'm wary of the scooter dealers here, but what else can a person do but try it out.

Everything related to buying scooters, new or used, seems to "pain" these people at these shops.

I've come to conclude they just don't like us and don't want to be bothered.

Sorry for your problems...

Deb...I'm seeing it more as a issue of bad customer service and Florida dealerships wanting to make the most $$$ they can out of you.

I do believe that American rider culture has been so geared towards "bigger is better" and the outlaw image that now that things are changing - they have to change - we are seeing some backlash of that. That's for another post however.