That every changing way....

I live an hour north of Tampa, Florida.  I never expected to be here, I never really gave much thought to living in Florida.  I like the area, the state...southern living suites me.  Except for the killer humidity.  This past Saturday I rode down to city as part of the Equinox rally.  I had planned on scoring at least 200 points and adding to my total.


So I prepped for the trip wisely.  I would need water and lots of it, as the temperature would be in the mid 80's but the humidity would make it feel like it was in the high 80's, low 90's.  (high 20C to low 30's C).  I had filled my gas tank earlier and had the good people at Affordable Motorsports gave her a once over and an oil change.   I had also, on a whim, bought a new farkle - a crampbuster cruise assist - and wanted to give it a good try out.  This run would would do exactly that.

Riding in cold weather is a challenge of course, but is solved by layering.  Hot weather is all about hydration.    So I packed a cooler with semi frozen water and off I went.  I was gone most of the day, only managed to do a little over 100 miles and fell 3 points short of my ultimate goal of 200.   I also managed to get caught out in the rain.  I missed a few things that I wanted to get due to circumstances beyond my control.  I also wanted to go eat lunch at the famed local eatery, the Taco Bus but as the day went on the heat and humidity continued to climb.  By noon I had it.

I noticed that I had stopped sweating, never a good sign and had a slight headache.  These were sure signs the heat was getting to me.  Time to pullover, eat and drink some good food at a local restaurant   I would have preferred the Taco Bus, but Mr Empanada was right here.  I should have went with my first choice, the food was filling but less than satisfying   I sat for about three-quarters of an hour in the air conditioning, drinking water and cooling down.  I had some choices to make.

I had managed to score lots of points so far as part of the Equinox to Equinox rally; hitting most of the places I wanted to go and finding some odds and ends on the way.  I figured I was close to my goal of 200 and a quick look at the sky showed darkening skies.  Suddenly I was torn about what to do.  Did I continue down into town?  I was tempted to head over to historic Ybor City (pronounced ee'bor) and pick up at least 50 more points.  Down the main drag into Tampa proper all the way to the Air Force base picking up some odd points here and there? 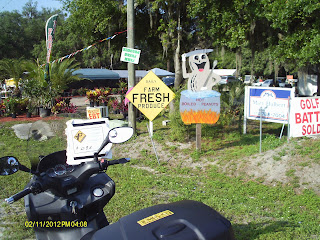 Points like the giant peanut I passed earlier?  Which was a serendipitous find  Should I head home, after all the heat had me in it's grasp before?  Did I want to battle heavier then expected traffic for a online rally I really had no chance of winning?

So I turned it around, heading for home.  The sky didn't look that bad.  Then it started.  Light at first then it started to plink, plonk  plink off my helmet in a every increasing rhythm.  I pulled over, grabbing yet another picture, and slipped on my rain gear.  Just in time as the skies opened up in earnest shortly after that.  The good news was the humidity and temperature dropped drastically.  The bad news is that the rain kept up, varying in intensity but confirming that I made the right choice to turn back.  I would rather ride roads I know in the rain than roads I don't.

In the end however I was rather disappointed in the day and the ride.  Kimmie was great.  My new cruise assist required a little bit of adjustment but once I got it right I promptly forgot about it.  That is the best recommendation I can give.  I was disappointed that I would have to go back.  Deal with the heat and humidity and traffic some other day...all because I wanted to finish in the top 25.  All because I had a city to explore on a bike.
Posted by The City Mouse in the Country at 7:42 PM

I am impressed that you turned back and were only 3 points shy of your goal for the day. Good job.

We were out on the bikes yesterday but at 89˚F in the shade I didn't feel like stopping for pics at all. Next time, lol.

Folks who don't ride haven't a clue the challenge riding in the heat presents. I find the humidity particularly grueling. I have no answers, yet. I'm going to try some things this summer.

I have no idea how many points I have. I passed up lots of photo chances last weekend. I just wanted to go.

Good on you for listening to your scooter sense. It can really be hard sometimes can't it?
~k