The destination is worth the journey

Susan, my long time suffering girlfriend, and I had a little disagreement the other day.  I took off for a few hours Saturday morning to ride to a few cemeteries and historical markers as part of the Equinox to Equinox rally.  She had hoped to spend some time with me.  We both have a love of history and in particular, old cemeteries.  It's interesting to walk along the stones and see how they reflect the lives of the people at the times.  For example, in Grove City, Pennsylvania,  for a brief period in the early 1800's a woman's name would not even appear on the tombstone.  All it would say was "Mother of" or "Husband of".  It is truly amazing how far woman of come in  100 years.  It's amazing how far they still have to go.  It's very interesting when you consider that other cemeteries of that same time period don't seem to reflect this particular belief.

As of late, I've been riding out to, and actively seeking, old cemeteries.  The problem is that a lot of these are private cemeteries on old roads.  More on that in a bit.

So we reached an agreement, we are going to start to go 2-up, because she wants to share this part of the adventure.  She has been the passenger on other people's bikes, she's actually logged more miles sitting behind someone than I have riding.  While I certainly want her to experience some of the beautiful things that I've seen on my rides...I'm also going to hate myself if something goes wrong.  She may trust me, I don't trust myself.

Riding has also became part of who I am.  It's a escape for me from the "real world".  Something that I'm not sure I want to share with Susan.  Then again when you make a new friend, as in the photo below, you want to share that experience with the one closest to you. 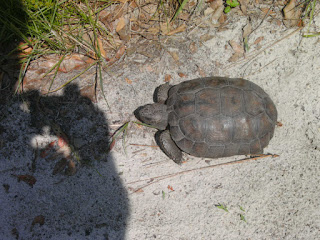 That's the beauty of riding, the beauty of my participation in the E2E rally.  It's gotten me out on the bike, taken me to places that I may not have gone or explored.  Showed me things, even where I live, that I would not have seen other wise.  While I was always willing to explore "around the next bend' the rally has taken me "over the hill and around that bend."  No wonder my lovely Susan wants to see what excites me so!
So the question is, for me...what's next.  Slow and steady at first around the neighborhood.  Slowly move into the side streets.  Being the worry-wort that I am I will panic if she sneezes on back.  I've no doubt we will go down at low speeds at least once.   I worry.  So to the You Tube videos and to the various forums asking for advice and help.  It may be easier to just buy a trike.  Or convince her to get her own scooter!  We will have to get her proper gear in any case.   I have a spare helmet, but she will need a jacket.    ATTGATT is no longer in question if she rides with me.

Speaking of challenges.  I'm rather happy with myself.  Many of the 100 year old cemeteries that I've been finding were originally family owned, although they are of historical importance and therefore listed on various sources.  I've had to go down some dirt roads to a few.  A few cemeteries are even supposedly haunted.  Sadly many of these have been damaged by idiots "having fun."  Kimmie has handled these roads exceptionally well, much better than I would have expected.  It's also hard for me to understand how in this day and age, that a good sized town can still have unpaved roads.  I've been impressed with my own skill, avoiding some major holes and being able to handle the bike on less than ideal roads.

Maybe this 2-up thing is not that scary after all.

Rob, I have a Susan too. I have wanted her to ride with me if only for a small ride for coffee, ice cream, or gelato, on a warm summer evening. But she flat out refuses. Law of averages I guess. Some do. Some don't. Lucky you, I think.

Rob, sharing the experience is always worth doing. Take it nice and slow at first and before long it will be second nature.

This is a nice post. Lots of thoughts. I like cemeteries, too. Old ones. I can understand wanting to share the ride, but I think it's good and healthy to experience things that no one else is there to see or enjoy. Just for you.

Ride slow and steady at first and maybe do some parking lot practice. I don't think my hubby had much practice with two up before we met (19 years ago) but he managed just fine. Hasn't dropped me yet.....

Mind you I finally went to my own ride several years ago. Hard to go back to pillion after that. it is good she has already been a pillion as she'll know what to do and not to do at slow speeds.

Me thinks you two will have fun and it will be something else for you to enjoy together.

I am late to reading this post, but it is interesting to me because I too enjoy hanging out at old cemeteries. Sometimes they become a ride destination and a place to picnic and read.

In fact, I am working up a blog idea on a few of the new ones I've discovered.

I can relate to your desire to share your ride experiences with your SO. I feel the same way sometimes with my partner but she does not and will never ride or "ride along" on a bigger scooter.

However, I always offer a "ride report" and she enjoys hearing all about it and just last night we drove out some of the roads I've scooted around here and I offered up a mini- tour of sorts.

I can stand to share some, but still need my solitude on my rides. Not sure things would be the same with someone along all the time.

But then I don't have to deal with this and it works out well for us.

I hope you two can work out a way to share and you also still have your alone time.

You and I seem to ride for the same reasons and I MUST have that in my life. MUST!

It's like AIR to me. Gotta have it! LOL

Rob, I can relate to your feeling wanting to escape, and have something for yourself, and at the same same feeling the desire to share all the excitement about riding.

I also had mixed feelings when my hubby got into riding, because riding was "my thing". Something I do for myself.

Also, he's a 6ft something, so riding two up with him as pillion was not an option.

But now I can do both, ride with him as or ride alone, and it's nice to have this choice, and he respects that I still need my own time to ride solo.