Okay, lets put the silliness aside for a moment.  This is a serious post after all.

"For my part, I travel not to go anywhere, but to go.  I travel for travel's sake.  The great affair is to move." - Robert Louis Stevenson.

I ride nearly every day.  I ride come rain or shine.  Heat or cold, day and night.  Sadly however I don't feel like I get much time to ride just for the joy of riding.  Most of the 6,500 miles I've placed on my scooter since buying it have been commuter or "work" miles, where I due a quick delivery on the bike to some out of the way location.  Even that does not happen very often, so normally it's just the boring old commute that puts the miles on.

Due to my work schedule or other commitments; group rides are "difficult" at best.  When the opportunity to take part in the Equinox to Equinox rally came about I could not resist entering.  I did so on a lark and quickly racked up some points simply by already knowing where some historical markers and over-sized statues were from previous meanderings. 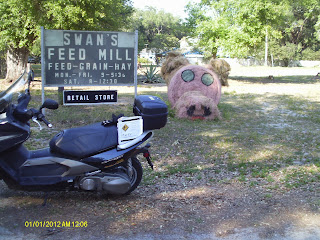 Fuzzy Galore was nice enough to talk about her research that she did and I used a few of her links in my research.  What I found was that Florida is a much more interesting piece of land than I thought (really, haunted dolls?).  For example, one of the things that surprised me is that there is a historical marker, buried in the weeds next to a gas station.  I get gas at this station now and again, and would have never noticed the marker.  It's simple in it's eloquence and tells one of those interesting, but forgotten stories about how Florida - no, America - was built. Sadly there is a saying in Florida:  "When developer money talks, history walks."

Or things like the World's smallest police station.  Interesting to be sure but not worth the 5 hour plus ride for me to only get two points out of it?  Would I have ever known that less than 7 miles from my home is one of the few covered bridges in Florida? 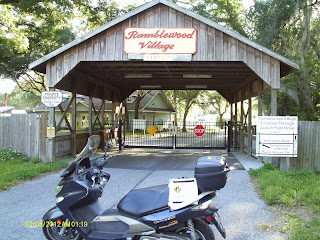 Sometimes locked into a car we forgot about all the real world beauty that is just the other side of the window.  Sometimes on a bike we are concentrating so much on keeping an eye on the road, the traffic, the weather...that we let pass things by.  Oh, it certainly harder to do on a bike...but it does happen.

I learned much about Florida that I didn't know, including the fact that the "Fountain of Youth" was a creation of European settlers that came after Juan Ponce de Leon.  They could not understand how the local Indian's live two to three times longer than Europeans (a combination of diet and lack of some disease's).  So it had to be "something in the water."  Sadly this was not to last.  Nor did I know that the Seminole tribe was more a combination of Creek Indians and runaway slaves then a distinct group. 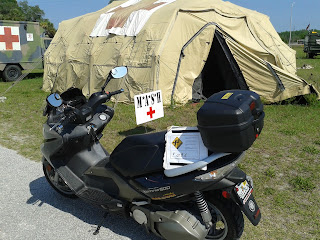 I learned all this because I got out on Kimmie and road to places unknown.  Seeing things and actually stopping to read the road side historical markers that I am taking pictures off.  For example, near my job is an flea market and they have some old military equipment from World War Two and the Korean Conflict, including an old MASH tent.  I stopped, and lo and behold, you could actually walk into the tent.   What surprised me was that the tent was actually fully equipped with the medical devices of that era.  That alone is worth the stop and frankly; if it wasn't for the rally, I would have never have stopped.  Just thinking that it was an old tent with a sign placed in front of it. 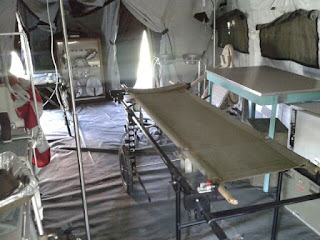 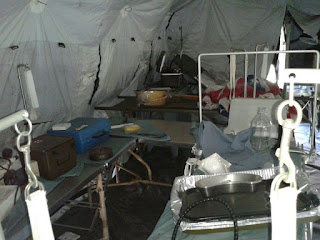 This Saturday I have a "big day" planned as I intend to run into Tampa itself, about an hour south of me, and gather up over 200 points.  That's if I manage to hit all the various cemeteries  stadiums, over sized statues and other odds and ends that I know of in the city.  This will also give me a chance to try out a new Farkle (but more on that later).

So a big "Thank You" goes out to the guys over at the Pace Podcast for coming up with the idea.  The whole idea was to get out and ride...and I got to broaden my mind too.

"We live in a wonderful world that is full of beauty, charm and adventure. There is no end to the adventures we can have if only we seek them with our eyes open.” – Jawaharial Nehru
Posted by The City Mouse in the Country at 8:41 AM

I am sadly lacking in the E2E photo department. Can't seem to get motivated to plan a route for some reason.

I am glad you are going to have a chance to get out and do some non-commuting miles on the scooter. Much more enjoyable.

Well truth be told I don't know if it will end up being that way or not. I do have a plan in the back of my mind. Just got to go do it.

Rob, that post title rocks!! Is that original or borrowed? If it's all yours, please write the book. I will read it for sure. Love your posts.