A ball of yarn (the revolution continues)

Before I begin this little article I need to explain how I view life.  Right now as I sit and write this my two cats, Tipper and Sparky, are playing with a ball of yarn.  They are having the time of there lives chasing it about, getting tangled in the loose threads and unraveling the yarn.   Some strings come apart; others are frayed and tangled, so much so your not sure where they begin and end.

What is more important?  The individual threads or the ball of yarn?  The ball of yarn represents society, the threads are all the various pieces that make up this crazy world.  Deep huh?  I bring that up because of the revolution what is going on right now in the motorcycling world.  While, that may be to strong of a word.  The forces that are acting on the motorcycling manufacturers are varied.  They have reacted in various ways, and for someone like me that likes to connect the various threads into a whole...it's been a joy to watch.


The mid range motorcycle market heats up with the introduction of the Harley Davidson "Street" group of bikes.  A 500cc and 750cc model which - despite much bitching from more traditional Harley riders - was a move Harley had to make to stay relevant in the market place.
Kawasaki enters the maxi scoot market with their J300 model, although at this time no US distribution is planned although I think that will change soon enough.  Honda is making a grab for a major chunk of the young urban professional market with there Grom, Forza and (highly modifiable) Ruckus models.  BMW exceed there projected sales of their "Urban Mobility" scooters by over 70% although no one expects that to last.  The Suzuki Burgman may not be the leader it once was in the maxi-scooter market and that is something Suzuki will need to address, and the reviews of the Kymco MyRoad are promising.

Suddenly it seems, there is a demand for mid size bikes.  Scooters seem to be leading the charge.  The question is why?

For one thing the traditional motorcycle audience is growing older, that much is obvious to all involved.  Sales have been falling over the last several years and  the industry needed to attract new riders.  Obvious again right?  There are other forces of course.  Crippling student debt for those under 30...lack of public transportation in most cities...the high cost of owning a car...people having to work 2 jobs just to make a decent wage.  More people than ever before are living with their parents, sometimes into the late 20's.

You contact the first two pieces of yarn and start to add the other threads.  You have to take into account other issues like the existing American highway system - your going to need some power to get from point A to B.  Your going to have to take into account gas prices and American sensibilities...the "Bigger is always Better" thought process that seems to define who we are.  Suddenly you have a large ball of yarn that leads you to one conclusion.

Any businessman will tell you that the group you want to advertise to is the 18 - 35 year old.  This is the age where, in the past, most of the disposable money was.  This is also the age where you establish brand loyalty.  If you start using product A at this age your most likely to use product A the rest of your life.  If your going to get someone on a bike this is the time to do it.


Advertisers and marketers are still singing the praises of the "You meet the nicest people on a Honda" commercials from the late 60's and early 70's.  Those ads probably did more to introduce the idea of a Japanese motorcycle to the to the states; they created an image.  An image the average joe could see themselves part of.   Items today like the Grom are seen as hip, fun and at a little under $3,000...very affordable! 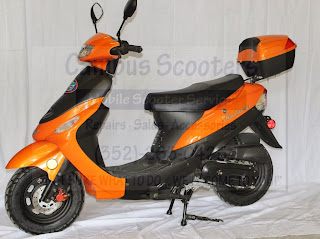 The problem however is that this age group just does not have the same resources as it did ten or twenty, thirty years ago.  They have more options for what little disposable income they have.  A lot of smaller scooter companies realized this and took advantage of it.  That's one of the reasons if you look around in any city today you see a lot of little Chinese 50cc scoots.  The major motorcycle companies are jumping in into a market they believe will grow in the future, the mid sized range.  A lot of scooters are already there.

What's next may cause a heart attack in many traditional bikers, but the manual transmission is a dinosaur.  Expect to see more automatic motorcycles in the next five years or so.  A lot of people have cut their teeth on the automatic scooters, I don't expect them to change gears so to speak.

Personally I think it's a good thing.  I still don't think we will see the streets full of scooters like you do in Asia, but I do think the motorcycling segment of our population will grow.  The ball of yarn doesn't lie.
Posted by The City Mouse in the Country at 8:37 PM

This scooter revolution has already happened in Europe. There are plenty of makes and models to chose from, also automatic motorcycles like the Honda Integra is considered normal these days. A scooterist is not the odd one out anymore, a scooterist has become the leader of the pack.