The Buddha and me (and updates make 3)

**NOTE** At the end of my day the bike tire went BOOM!  You can read about that here.

When you’re traveling, it’s easier to let go of a beautiful moment because you know the adventure continues. No matter what rolls by outside your window, there will inevitably be more to appreciate when you get off the [bike]. - Ehren Prudhel from Tiny Buddha 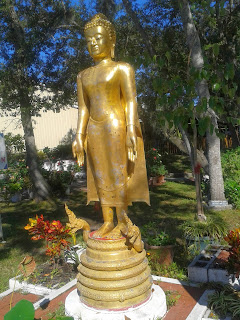 When a friend of mine posted her photo's of a recent trip to a Buddhist Temple in nearby Palm River, Florida I knew I had to take the bike down.  I don't consider myself a religious person to any extent, but I've always had a affinity for Eastern Religious practices.  If anything I consider myself to be a lapsed philosophical Taoist.  Perhaps a Pastafarian Deist?

The chance to walk along the gardens and mediate, even for a few moments appealed to me.  I also enjoy Thai food which is a rarity for me, and they offered this for sale on Sunday mornings (sadly nothing offered peaked my interest).

What attracts me to the Eastern Religions is the idea of wholeness.  At the risk of getting to philosophical, there is no separation between the mind and the body.  Diet and exercise (such as Yoga and Tai Chi)  are considered part of the everyday religious practice.  Sex is not viewed as a negative.  In fact, there seems to be very few negatives in the Eastern World view in my opinion.  Life may be full of pain and suffering, but it is just an illusion.  A wonderful, crazy, mind blowing illusion.

As I sit here and write this I can not help but think that is one of the reasons I enjoy riding so much.  The bike is not something I climb into and surround by, but rather something that I am part of.  A flick, a lean, a push or a pull and Kimmie obeys.  My scientific mind understands the control is just a illusion, physics will always win - I have faith that a cager will not cross the double yellow line or pull out in front of me.  There is a wholeness to riding. 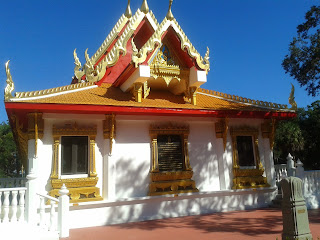 I decided not to enter the temple proper due to the fact that I was in full riding gear, and I overhead a young man stating he wanted to say a few prayers for his deceased mother.  He did not need to have me walking about snapping pictures like a fool. 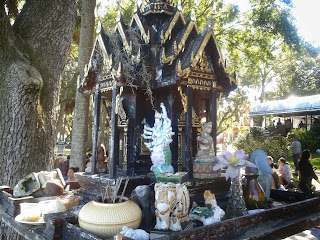 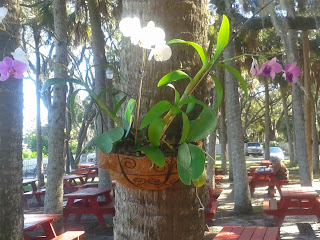 The grounds were rather small but there was a variety of exotic flowers and the riverfront was peaceful, I found myself wanting to come back during the weekday's and just sit and be quiet.  I also considered asking several monks to bless my bike.  Perhaps I should have.

The ride itself only took about 30 min and cover about as many miles on roads that I more or less understood and knew well.  I had been wanting to stretch Kimmie legs on roads I did not know, lately I've been feeling like all I ever do is ride to work.  While being a "scooter commuter" is all well and good it really does not challenge me as a rider.  Muscle memory tends to take over riding the same paths day in and day out.  While repetition may be good for Tai Chi, it is (in my humble opinion) not good for a motorcyclist.  While our attention will naturally fade on the back of a bike from time to time (just as it does in a car), I feel that our attention is sharpened on roads we don't know or ride often.  It's good to keep the mind active and awake when riding.  I'm glad my mind was active.  If you don't know what happened read here.

The ride would also give me a chance to try out the new "My Tracks" app for the smart phone.  I have been wanting a way to track and then review my ride to parts unknown.  You never know when your going to find that special road or roads that need to be explored further.  Or in my case a neat little winery or milk shake place via pinpoints!  This ride can be imported to Google Earth and then shared, which hopefully I did correctly at the end of this entry.

While I've not adopted the idea shown in the photo, I think that is going to be the next project.  Lately I've been meaning to go further and I could use my GPS and speedometer applications on my phone with ease in this set up.  Part of me likes the idea of seeing where I've been, the other part does not want to look back.  The camera on my phone could also take video if I mounted it correctly.  While not a fan of ride videos (which I find boring) I could see it use in some cases.

I'm not sure if I like the slow but steady move I'm making to an all Google platform.  I enabled Google + comments once before and it seemed that although my blog reached a wider audience, I received little to no feedback.  I would rather have the feedback, so if your unable to leave a comment PLEASE contact me via my email.  It's important for me to hear from you to determine what path I take.

Here is the URL to the ride.
Posted by The City Mouse in the Country at 7:46 AM