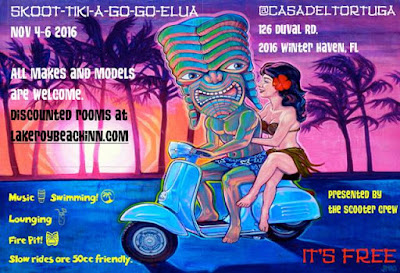 Even though I don't really know them well, or get the opportunity to ride with them often...I consider myself part of the Scooter Crew.  It's an odd little collection of people that seem a little more geared (pun not intended) towards classic Vespa's and lower cc bikes.  Kimmie is one of the bigger bikes in the group but I've always felt welcome and comfortable in the group.

Winter Haven is about 1 hour east of me, near Orlando, Florida and the rally itself was held at a private residence.  The name "Casa Del Tortuga" is Spanish and translated means the "house of the tortoise."  This is because the home has at least two wild Tortoise's living on the property although they seem pretty used to having noisy humans about.

I've been to this location before and again was impressed with the designs of Gene Leedy (while the home was not specifically designed by Leedy, it was surely influenced by him).

Sadly do to family commitments I was not able to attend Friday night or spend time there Sunday.  I was able to spend time going on two wonderful rides around the city of Chain Lakes.  It was a perfect day to do that ride, with clear skies and warm but not humid temperatures, and again Winter Haven impresses me with rolling curves, wonderful water views and gently sloping hills.  It is a lovely city that is trying to revitalize itself and is filling up with small restaurants and specialty shops.

Again I wish I trusted myself enough to take pics while moving down the road or had a Go-Pro video set up.  A few of us even talked about the Go-Pro's and their advantages and disadvantages.

That's the thing that I enjoy, getting into quiet conversations about life, food, bikes, beer, and what ever else we care to talk about.   I even got to slide my business card to two different people although that was not why I was there.

Andrew owns an open air Tuk-Tuk, a small auto rickshaw that are often found in Asian countries.  He pulled that out for a slow ride through the city as we went as a group for lunch.   It was interesting to ride behind him and see the look on people's faces as this small thing went by. 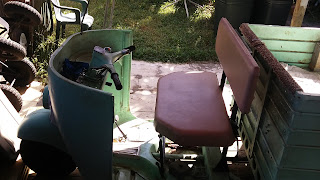 
As a side note, this was the first time I've used the GPS function on the Sena to any great extent.  It worked wonderfully but at higher speeds I'm still having issues hearing it.  I'm thinking it may be more to my helmet (which I'm going to have to replace sooner or later) than anything else.

I'm going to try a suggestion and let you know how that goes in a few days.
Posted by The City Mouse in the Country at 8:18 AM

It looks like a great time even if you only got a few rides in and not the whole weekend.