In search of the missing spark plug.

It was a brilliant day.  The weather was a very comfortable 75 degrees (23 C) and the sun was shining.  Susan's friend Craig, who rides a 10 year old Harley Road King, was going to help me with the battery change out and while we are at it, probably a oil change as well.

I had purchased a battery from Amazon and although it was recommend that I get a gel type battery from the Kymco Forums, I went with the maintenance free chemical battery from YUASA (model # YTX14-BS) although it occurred to me after reading the instructions that I may need to buy a tender later.  Such is life. 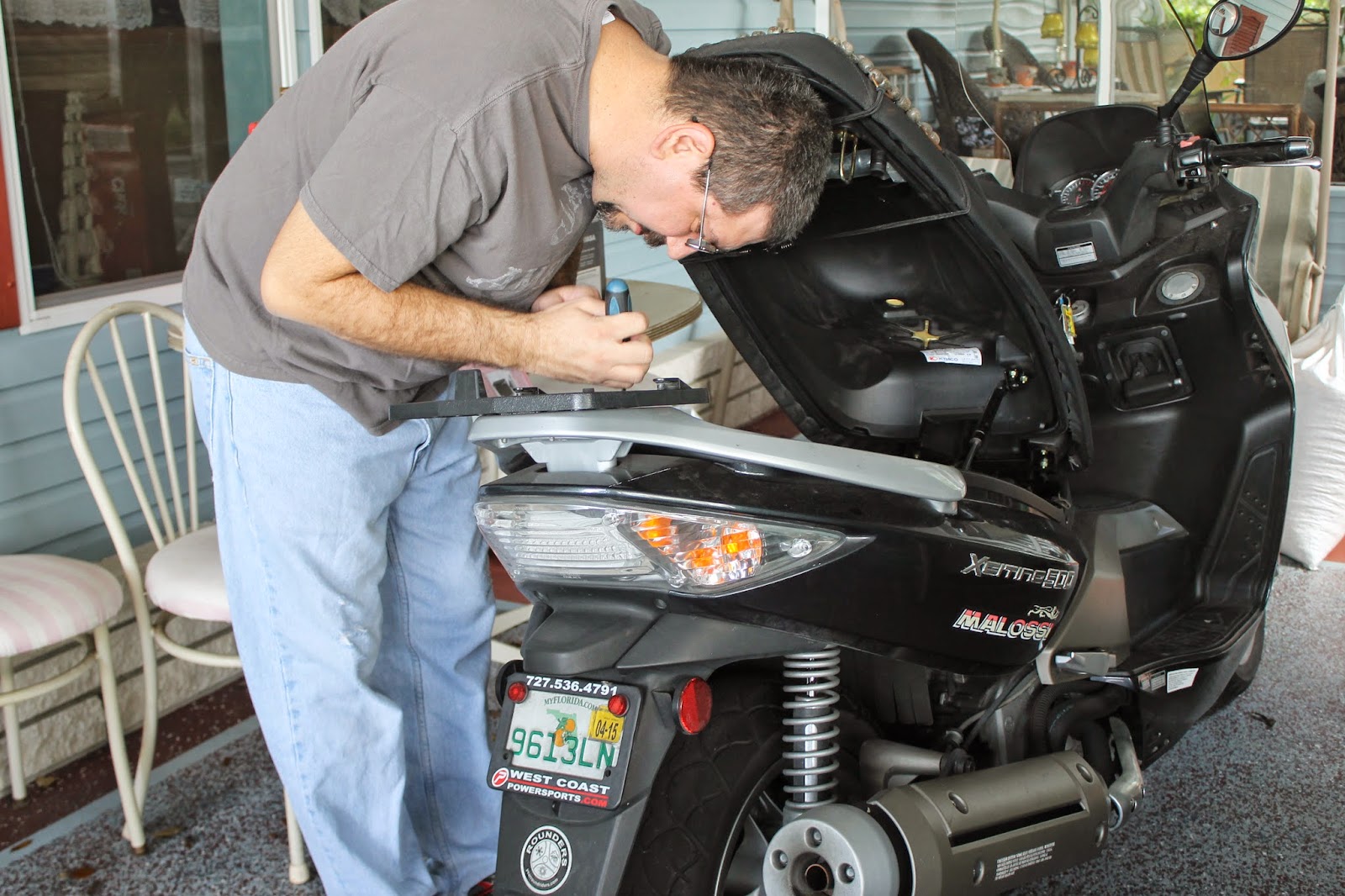 Step three...Put the new battery in.  Again no issues.

Step four...Turn on the bike and start her up.  Nothing happens.

The bike would turn over but not start.  It wasn't the battery of that I was positive.  Which brought us to a couple of options.  The spark plug was bad or it was either a bad fuel line, fuel filter or fuel pump or all of the above.

Craig and I turned to the internet.  We figured the spark plug would be the easiest thing to fix...only we could not find the plug.  Frankly ripping off the various plastics that make up the Kymco appealed to neither of us.  We knew the info we needed was somewhere.

I love this quote we came across in one form or another on various sites, forums and discussion boards.  Even my local mechanic who I called for help said it.  "The Kymco is a well put together bike but a bitch to work on."

One hour goes by, now two, plastic pieces are slowly growing in my driveway and we still can't find the spark plug.    Instead of being frustrated I was actually enjoying myself.  It's not often that I get my hands dirty with a technical problem and my mind was engaged.  Craig is also an engineer and we were thinking along the same lines.  We still could not find that damn spark plug.

Making an educated guess, we decided to spray some starter fluid into the carb and see if that would get the bike to turn over.  We rocked it onto the center stand and opened up the carborator but before even spraying the starter fluid in Craig said:  "Try starting it now...just for shit and giggles."

VROOM!!!!   Over and over again she started right up.

It seems like the local explanation.  It would explain why the bike would not start at all during the cooler temperatures of December.  Why I had the intermittent stalling while sitting in traffic.  Why the bike would suddenly start up after being moved about or rocked onto the center stand.  Why we were having such a hard time starting it.

The good news is that it's a relative easy issue to fix.  I am still going to take the bike in to the local mechanics had have them due a full tune-up.  Let them find the damn spark plug (which I found out is accessible by removing the plastic from the center hump and the use of a 10 mm ratchet on two or three extensions).

It started after that several times without issue.  I did get a chance to ride it as I had a change in plans and had to pick up a friend from the airport which was totally unexpected.  It sat all day, then at 8 PM tonight...started right up.

I know I needed a new back tire, so I ordered that and will wait till it's in before taking the bike to be serviced.  Might was well get it all done at once, including the oil change.  I had been putting off a tire due to no good reason.  Now I had no excuse.  I decided to go with the Michelin City Grips because I've heard good things about them on the forums.  Now lets see if they are worth it.

I'm going to ride tomorrow and the next day, the bike should be going into the shop on Thursday.  This is getting to be an expensive experience.

Posted by The City Mouse in the Country at 7:45 AM

When it comes to motorcycle maintenance and its related cost, all the money saved in gas is usually going down the drain. But we do it anyway...

I admit to doing little to no maintenance on my bikes because I happen to know wonderfully skilled mechanics, and they need to make a living, too ;-)

The weird thing is Sonja that even though I have the book knowledge, I do not have the practical real world knowledge to fix something. So a few months ago I decided that I would actually try and apply what I know to the physical world. It's been a steep learning curve...I learned a long time ago what works in theory is often not how the real world works.

Robert - I can feel your pain. It seems that some design engineers go out of their way to make things as difficult as possible for mechanics - whether pro or amateur. But hey, that's what keeps it interesting.

At least you got in there and got your hands dirty. A lot of times it is easier, quicker, and more cost effective to get the mechanics to do things.

I like to help hubby do things on the bikes, but I think I mostly get in the way, lol.

My Burgman is similar Robert. Lots of plastic to remove to get to anything and I am NOT Mr. Mechanic. I have a Suzuki mechanic I take mine to. Pricey but I just don't trust myself!