Catching up on my reading.

Without going into to much detail, I started to feel ill the last day of my mini-vacation.  By Tuesday, a day when I traditionally run one of my routes, it turned into a full blown flu.  When I called off from my normal job on Wednesday, my supervisor did not recognize my voice.   It is only today, Saturday, that I am starting to feel more like my old self. 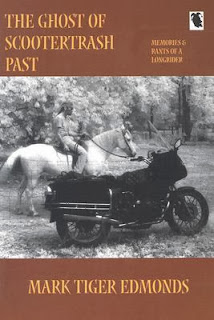 Needless to say my riding experience this week was confined to reading blogs and the wonderfully written "The Ghost of Scootertrash Past"  by Mark Tiger Edmonds (originally published in March of 2003).   Mr Edmonds is actually an English professor at nearby St Leo University.  Which means that at one time or another I've probably waved at him on my scoot.  I got the feeling from reading "Scoottrash" that he's not the type to wave back.  Not because my choice of ride is a Kymco scooter, it's just because Edmonds comes off as a bit of a curmudgeon.  He's got damn more important things to do than to wave back at some damn fool.

I learned about this book from the In The Desert Scootin blog and frankly picked up this book when I saw it at my local library.  You can read his review of the book here.   I was not that far into it when the following quote hit me like a ton of proverbial bricks; "You ain't got to decide but two things, Boy. You got to decide what's important. And you got to decide what it's worth. And then you're done deciding, and you can get up off your ass and get to it."   Rough, ready and to the point.  I think I'm going to like this guy.

The problem is that as I continued to read the book his writing style started to grate on me a bit.  He be waxing poetic about the Oregon inlets one moment then off on a tangent about Waitresses.  Then a line or two of pure brilliance....then I have to wait for something, anything to catch my attention again.  I know I may not be fair here, reading while I was sick an all.

A book should grab you, force you to not want to put it down.  Sadly with Scootertrash, I had to force myself to pick it up at times.  The book does have some fun moments.  One of my personal favorites is where he and a friend are riding through south Florida in the heat of summer when suddenly "[A] chipmunk broke from the cover on one side of the road and ran across it.  We both came to an abrupt halt right there in middle of the remote thoroughfare.  To begin with, chipmunks are not native to this part of Florida.  Secondly, this on was about three feet tall and scampered on its two hind legs.  And it was wearing what appeared to be smaller chipmunks on its feet."  He describes seeing a skunk follow the chipmunk and the unmistakable sound of Disney like cartoon music with someone screaming "You are all HAPPY animals." 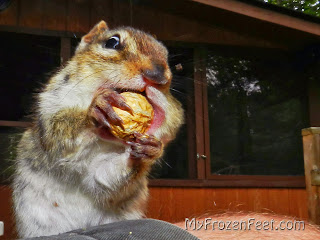 "I feared," Edmonds writes, "this was the dreaded flashback we heard about."

It's a weird, wonderful and completely unexpected moment that a rider might actually come across. It's moments like this, when he writes about what he sees and experiences; be it a shooting star or a moon lit rainbow that Edmonds is at his best.  The people, the places - be it a cheap motel room or a dive bar out in the middle of the sticks don't really stick out.  These things are just secondary and at times annoyances to him.

At times the prose does demand to be said aloud, Edmonds is a well known poet, and parts of the book will send a chill down your spine with the beauty of the open road and this thing called America.  I agree 110 percent with the Desert blog on one point.  One passage of this book is more like a spoken word poem as he and a young lady discuss their views of the road...in this case Edmonds playing the bad guy.  “She giggled and asked about the sunshine and unfrozen rivers and flowers and birds and butterflies in the air. She asked about alligators and the Southern Cross and the Spanish moss. And she wanted to know about manatees.
But I told her about the heat and the cold, about just getting' old, and about thousand mile days. I tried to tell her about border towns and local citizens' frowns and about how the highway will wear you down out there between the Mohawk Valley and Tampa Bay.” (Seriously - read that last bit aloud).

By the end I was not disappointed.  I was not that satisfied either.  The book didn't really make me want to go on a "long ride."  Maybe because I seek out what he seeks out.  An experience, a chance to see something new...something unexpected and wonderful.  I think that is what most "serious riders" want - and yes, I'm including myself in that group (that's another post for some later date).

In the end it's a good travel book, but you really don't need to be on a motorcycle to enjoy the sun rise over a desert.  The smell of wildflowers in the morning air, the touch of your lovers hand watching the sun settle into the sea...what you do need is to be open to the experience.  Edmonds certainly is and more often than not he excels in bringing that moment to life.  I just wish I didn't have to slog through so much....hold on!

On second thought  and this just occurred to me, his book is a lot like riding a motorcycle.  You have to go through the boredom, the heat, the bugs, the pedestrian to get to that magical moment.

Well I'll be damned.
Posted by The City Mouse in the Country at 3:21 PM

A friend of mine had an expression that comes to mind after reading this: If you keep digging through that pile of manure you'll find a pony under there somewhere.

Nice review of "The Ghost of Scootertrash Past". The title itself is very engaging. Thanks for being up front about it being a slog...I will make sure I am in the right frame of mind before beginning it.

As for the author, I think you may be giving him too much credit when you say he wrote the book to mimic a motorcycle ride. Writing should never be dull or uninspired.

Rob, sorry about the flu; glad you're better; and thanks for that thoughtful review. You're right about those passages. Nicely written, like poetry indeed.

Most people don't bother much with poetry, myself included. Poetry doesn't easily associate with expressions like 'rough n ready', 'gruff', or 'manly' yet that passage brought the Yukon gold rush poetry of Robert Service to mind which is wonderful stuff, verbal portraits of gritty saloons, of life and death in the far north.

Thanks for sharing that. You made very good use of your down time.

Loved that last quote about being on the road. But I agree with Dave (above) that good writing is never dull.

Nice review. It is interesting that you mention that he seems like a curmudgeon. He actually embraces the term and does a local radio show with curmudgeon in the title.

Like the author, I, too, enjoy long rides. After reading his books, I am seriously considering a getting something with which I can roadside coffee so I can sit at somebeautiful overlook and enjoy a cup of my favorite beverage.