As a blogger, I hate to jump on the bandwagon of something.  As of late everywhere I turn I've been hearing about or seeing the photographs of Hassan Hajjaj, particularly because of a serious of photo's he has taken showing the - to quote the Guardian - "The motorbike girl gangs of Morocco"

I don't know what's more interesting to me. The photo's themselves or the interest they have generated.  Perhaps because we here in the west don't really think of woman belonging to "motorbike gangs" or even riding at all.  If they do, the popular image is that of being on the back, a passive passenger.   In a country where bikes are towed to events like Sturgis or Daytona Bike week, the idea that woman are using them every day in their day to day lives seems foreign, alien to us.

Perhaps what makes the photos so good, so interesting is that these woman are not only riding but are in the "middle east" (actually Morocco is  a Northern Africa country that shares a long and varied history with Europe).  We Americans tend to paint the world with a single brush and seeing something that doesn't fit that world view can, at times, be shocking.

To the best of my knowledge all the woman in the series are veiled and modestly dressed.  Yet their is a shocking amount of color, Nike and Gucci branded djellabah (which covers the face) are everywhere, and sensible shoes rule the day.  In nearly all the photo's the woman are relaxed.  Again, I would not call any of the photo's "sexy" but the woman are confident...and that makes them sexy.

Good art should challenge our perceptions.  Make us question are beliefs and understanding of the world.  In the case, Hassan Hajjaj has done that in spades.  My only wish is that we could see the woman actually working on the bikes, getting their hands dirty and actually riding about town in their colorful polka dotted outfits.  Seeing them carrying their crates filled with goods and children would have made these images all that more powerful to me.  That I suppose is a minor issue.  Supposedly they are not models but actual working woman of Marrakech...I have been to countries where scooters and motorcycles outnumber cars and seeing bikes being ridden as part truck/part family car/part bus is not that uncommon.  But I suppose that is part of the charm of these photo's.   Most of us already have are preconceived notions, and I for one are happy to see those notions tilted a bit.

The second thing that really struck me this week was from the files of the the Scooterfile website.  They raved about Hero's new RNT design, which is not only lovely but shows the diversity of scooters...and what happens when a company actually knows it's market.   Hero is an Indian company and the RNT is a bike developed almost exclusively for the developing world.   The RNT was designed with help from the Eric Buell Racing, who also has exclusive dealership rights in the US.  I cannot see much of a market in the developed world for this thing...but the design is brilliant. 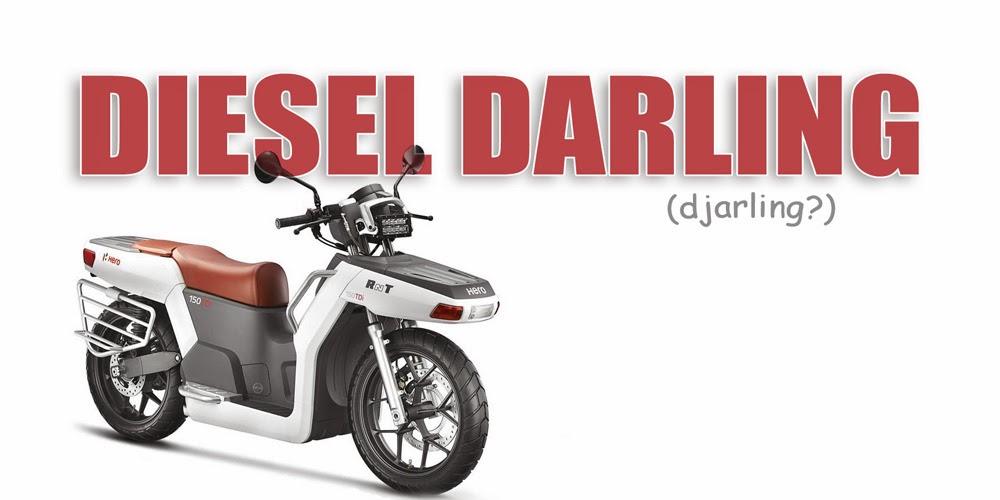 Long story short its designed to be a workhorse.  You can see it can already carry two or more people easily.  Packages and crates can be lashed down easily in the front and back.  It has a 150cc diesel engine which provides 14 horsepower , a removable front LED headlight that then can be used as a flashlight. This is where the brilliance kicks in.  There is a socket to plug electric items into...so it's a generator too.  The front wheel is also powered by a 1.3 HP motor, so it is a two wheel drive.  Always helpful in those parts of the world where the pavement ends.  Diesel also tends to be less expensive in the long run while providing better fuel economy (one of the reasons you see fleets of trucks running diesel).

The RNT is often compared to the Jeep of the 1940's.  A "Do anything, go anywhere" vehicle and from what I read, it is.  What it's designed for is the back roads of India, Nigeria, Afghanistan.  It's designed to bring your family into town to shop, for slogging through unpaved roads and taking a farmer's goods to market.  It's designed for work.

Yet it's also beautiful.

Posted by The City Mouse in the Country at 9:04 AM

I must have been in a cave, I hadn't heard of Hassan's photos before this post. Thanks for the info and the link.