A complete surprise to me + Happy New Year!! 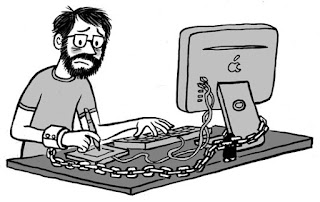 On of the reasons that I've always maintained a blog or a journal or something along those lines is because I enjoy writing.

So imagine my surprise when I found myself waking up about 5 or 5:30 every morning for the past couple of months to write a novella, or a short novel.

It all started as a bit of a joke.   I was talking to a friend of mine that actually has written several romance novels.   What we we talking about doesn't really matter but I found myself challenged to write better than half the hacks in that particular field.    So I managed to write a 2066 word short story that got some good feedback not only from them, but from the general public as well.

I'm friends with several writers in fact so I felt that if they enjoyed the work I was doing, then I was on the right path so to speak.

The only problem was that I didn't think I was done with "Emma", the main character in the story.  Could I, a guy, write something from a women's point of view that would make sense to women?   How does one write a particular type of scene if you've never experienced that yourself?

The Emma character story started to grow.  Different chapters were written.  She started to grow into a monster of slightly under 15 thousand words.   Then when that story was finished...I looked back and said, "How did you get into this predicament Emma?   What drove you there?

So the prequel had to be written with the intent to unit both stories into one coherent whole.   That took another 15 thousand words.

I wrote a novella.

It was finished just a few days ago and now, it sits in the hands of five or six trusted friends who will review and edit it, helping me hopefully improve upon it.   There is still a lot of work to do because I'm sure there will be a rewrite or two in some areas, a couple of changes to be made.

Then I intended to see if I can either self publish it, or get it published the more traditional way.  However I'm rather proud of myself.   I managed to write something that may never see the light of day, but I still managed to do it.

One of the reasons that I was even considering becoming a truck driver was I liked the idea of a more steady income, something that was recession proof (drivers are always needed) and that I could see the country...and write about it.    After all, this blog was originally designed with adventures in mind right?

I will also admit that I missed writing, I was not doing much of it before October.   I could not really figure out how to back up the tractor trailer properly.   If you can't back up properly your going to cause a wreck.   It really is that simple.

So lucky for me I was able to take advantage of the Annual Enrollment Period in Medicare and keep myself and the lovely Sue from starving in the month of November.  In December, I swallowed my pride and went to a headhunter resume in hand.

By the middle of December I was offered a position with New York Life in their call center.  The pay was acceptable but not great.  The benefits however were amazing!!!

While I'm not happy with where I'm starting out, I'm told this is the way NYL does things.   At 52 years old I'm swallowing my pride and will do what ever is needed to be done.

You want me to clean toilets for those benefits?  DONE!

Did I mention I was vested as of day one as well?

No wonder it's so hard to get a job there.

The only thing that I don't like about the job is the commute.  It takes me about an hour both ways to reach my destination, which can be longer depending on traffic.   Even though gas is relativity low now, we all know it will not stay that low forever.

Suddenly a motorcycle for the comment starts to make a bit more sense.   Although I would have to ride the freeways again, something that does not appeal to me.  It's also been two years since I've ridden a motorcycle.

The last time I did, I was gun shy to be honest.  I would hate to buy another bike and be guy shy again.

Sue, when she pushes for a bike at all, wants me to ride a three wheeler.  She just feels that they are more stable and that I would be less likely to take a risk since they are a bigger bike.   Plus, as she points out to me...two of the three accidents that I were involved in were not my fault.   True...but still.

I have to admit that the Can Am's are fun to ride. 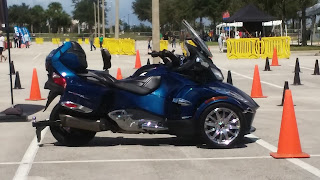 Although they are not cheap.

I got to get back to work.
Posted by The City Mouse in the Country at 9:30 AM