Every night I ride home from work at about 12:30 AM.  I enjoy this night ride because often I'm the only bike - hell, the only vehicle - on the road.  The miles just roll under me, the deer looking from their grazing with dull bored eyes, I don't think about them as long as they stay on their grassy knolls...I hug the left lane and do keep a look out for them (in the battle of a motorcycle vs a deer I fear the deer would win).  One close encounter was enough. 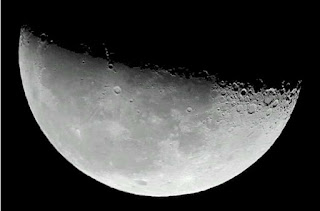 Often it's just me and a few stars.  Sometimes a big moon rising in the Eastern sky and I ride straight for it.  That was the way it was the other night, the moon was so huge in the sky and was reflecting back the Sun's light in such a way that only the bottom half was lit.  It was if God himself was watching my progress with one tired and dreary eye.

Still the miles fall under my tires.

I suppose a better rider could describe the feeling.  That feeling of isolation without being isolated.  A feeling of being connected to everything and nothing that only riding a bike can give you.  I've been a hiker for years and have felt that deep connection to the natural world before, on the bike however it's different.  Maybe it's the speed, maybe it's the increased awareness you have while driving a bike.

Maybe it's just the cool night air running across your body.

Who knows what causes it, what forces act upon you.  For me, the ride home at night wakes me up, makes me forget about the stresses of my day and job and brings all my senses into play.  I listen to the purr of my engine; I catch the smell of swamp water and heather as I pass through the woods.  I see the meteors streak through the blue black sky.

It's easy to understand why even the roughest of bikers wax poetic about riding.  On a night like the other night, I do too.
Posted by The City Mouse in the Country at 8:07 AM

A great description of night riding. At night the senses seem much more attuned to smells, in particular, and the complete lack of traffic allows one to relax just that extra bit when riding. The deer however are another issue entirely. We're infested with the damned things here (it's not unusual to see 20 or more during a 30 mile ride) and they pose a real threat which takes away much of the joy of night riding for me.

You wrote: "That feeling of isolation without being isolated. A feeling of being connected to everything and nothing..." Very nice. I know that feeling and love when it takes hold of me.

Yes, watch the deer. I couldn't agree more in an encounter between a deer and a scooter no one wins.

Great post! There is a quiet solitude when riding at night. I too enjoy the lack of traffic. Unfortunately I don't get to ride too much in the evening, but when I have I enjoy it immensely.

Very nicely done. There is something magical about riding 2 wheels at midnight. It seems only other riders get it.