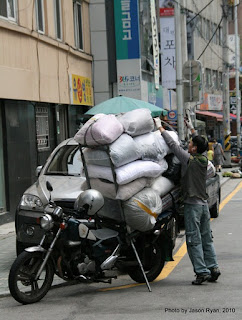 So I finally put the bike to work.  On day a week I have a 40 mile route where I deliver two rather small publications.  I've considered using the Bergie for this before, but finally got the chance this week.  I was curious to know if could be done, after all motorbikes of all sorts are used around the world to deliver food, papers and other other goods.  Why could I not use my bike to do the same?

Going in I had some questions, would I be able to carry all my papers?  How about the returns?  Even though I would be able to toss out the old papers in various trashcans along the way, would they fill up my trunk before to long?

As I loaded up my bike, two older ladies looked over and into my bike's "trunk"..."You have more storage than my car does" said one of them.  I took that as a good sign.  As it happened I was able to fill up the bike's storage compartment with all but one bundle of papers.  Considering how my route would bring me past the pick-up site about a third of the way through this was not a major issue, by then I should have room for the last bundle of papers.  Still though this was an inconvenience which is avoided in the car.   If I had a top case I could have taken everything (hint hint).

I was interested in comparing a few things between the car and the bike.  The bike would win hands down when it came to gas mileage compared to my car, but what would be my gas mileage while doing the route?  The Burgie has an electronic monitor that gives me an idea of my fuel economy; I filled up the tank before starting and reset the odometers.

In the end the Burgman averaged 44 miles per gallon, My route is 40 miles long, so for a gallon of gas I did the whole route.  Considering how I normally get anywhere from the mid 50's to the low 60's in gas mileage, I can't help but be surprised that the start and go nature of the route lowered the mileage that drastically.

Efficiency was another thing I looked at.  Would it be easier or harder to use the bike for the route?  Would I spend more time getting the papers from the car, or from the bike.

This was actually a lot closer than you might think.  I was able to pull up to the front doors of a few stores, parking just feet away from the entrance.  Once I actually drove onto the sidewalk to deliver to a street box...areas I would never be able to put my car.   Problem was I had to remove my helmet going into a few of the convenience stores I deliver to due to their security concerns (wearing a full face helmet prevents the security camera's from getting a clear picture of me...which I didn't consider till I was asked to remove my helmet in one of the stores).  Although it is legal to ride without a helmet in Florida, I always wear my helmet.  My gloves also proved to be more of a hindrance than a help.  After a few stops they ended up in the glove compartment.  This dressing and undressing took time.

With the car I don't have the maneuverability.  Sometimes I do have to park way in the back of the parking lot but I'm didn't have to go back for additional papers.  I had additional room for the returns and could separate them as well.  Not having to remove my helmet and gloves all the time is a definite advantage.

I give the edge to the bike but just barely. 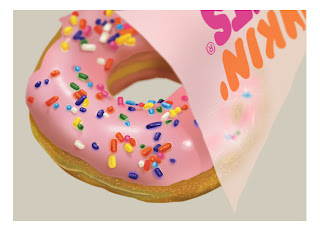 Comfort was another factor.  My car wins hands down in this category.  The temperature peaked at 85 degrees - which even native Floridians consider hot for February - and although I was comfortable while moving, the second I stopped and entered a building it got hot.  My jacket weighing heavily on my shoulders.  The air conditioning in the car is a wonderful thing.  Plus I've gotten in the habit of getting a coffee and a couple doughnuts about halfway through that then travel with me.  I could not do that on the bike without stopping, and since I normally have to work later in the day; stopping is not always an option.

The jury is still out to see if this becomes a habit.  i will be taking the bike out again next week on this same route to see if can be done faster and better.
Posted by The City Mouse in the Country at 12:45 PM